We have hands. Birds have beaks. Have you ever noticed how useful a beak is? While lacking our manual dexterity, birds have no problem securing their dinners and stuffing said meal down the gullets of their young. Beaks are used to manipulate objects and preen ragged feathers. Some birds use their beaks to impress potential mates, or to scare away intruders. Beaks can even be used as weapons. Have you ever tried to steal an egg from under an irritated hen?

Beaks are also useful to birders, as their size, shape, and color are all helpful when it comes to identifying bird species. In fact, the more attention I pay to birds’ beaks, the better birder I become.

I’ve long noticed the obvious differences, such as between a dabbling duck’s bill, adapted for eating plants, and a grebe’s pointy beak, just right for grabbing fish—or between the wedge-shaped, seed-eating beak of a finch and a warblers sharp, insect–nabbing beak.

Recently I was going through some old photos, trying to label a number of shorebirds. They were all in their non-breeding plumage, so I was reduced to examining other details. Leg length and color is very helpful, but most of the birds were wading, so I couldn’t see their legs. However, shorebirds show a remarkable diversity of beak length and shape, largely to avoid competing for the same buried resources. For example, long-beaked birds, such as curlews and godwits, probe for creatures buried far down in the muck, while short-billed plovers and turnstones search through piles of stranded seaweeds. The beaks were different enough that I was able to put names to most of the birds I’d seen.

While we’re on the subject of shorebirds, I learned that the females typically have longer bills than the males of the same species, likely so that they aren’t searching for food at quite the same depth. Similarly, the beaks of female American Avocets turn up more at the end.

How do these probing birds know when their beaks come into contact with prey such as a worm or clam? Their beaks have a sensory organ at the tip, aptly named the “bill tip organ.” The surface of the beak has many nerve endings (known as the corpuscles of Herbst) that sense changes in pressure—even if the beak isn’t actually touching the prey! Parrots, such as this Crimson Rosella (left), are similarly equipped, which may explain their incredible dexterity.

Some beak adaptations are truly remarkable. I’m fascinated by the specialized pliers of Red Crossbills (right), which allow them to open pinecones to extract the seeds. Pelicans have giant scoops for catching fish, while kingfishers have long, pointed beaks for more precise fishing. Sunbirds, hummingbirds, and other nectar eaters have long, thin beaks for probing the depths of flowers—which have evolved tube-shaped blossoms to accommodate them.  And woodpeckers have perfectly formed beaks for pounding holes into trees.

An orthodontist would diagnose Skimmers with having a significant underbite—if birds had teeth—but the protruding lower beak is perfect for collecting fish from the surface of the ocean. Flamingos’ beaks require the birds to feed upside down as they strain the water for tiny crustaceans.

Beaks tell you a lot about a bird’s diet and habitat, but they have many other purposes. Preening is an essential behavior, as it allows birds to “fix” their feathers, cleaning and oiling them (in the case of water birds), and reconnecting any interlocking barbs that have become separated. Preening also removes parasites such as lice.

Beaks also allow birds to regulate their body temperatures. Birds in colder climates have smaller beaks, while the huge bill of the toucan is as effective as an elephant’s ears at radiating heat.

A number of species use their beaks when courting. For example, “Gannets raise their bills high and repeatedly clatter them, the male puffin nibbles at the female’s beak, the male waxwing puts his bill in the female’s mouth and ravens hold each other’s beaks in a prolonged ‘kiss’.”

Bill clapping behavior doesn’t always have to do with mating. Birds of some species, such as this Australian Noisy Miner, clap their bills to communicate with one another. In some species, it’s used to threaten possible territorial trespassers or predators. Barn Owls, for example, hiss and clap their beaks to warn away intruders. 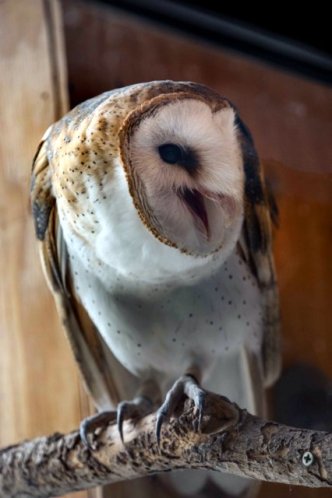 I used to feel a bit sorry for the poor birds, having to manage with their beaks instead of having fingers and an opposable thumb. But now I realize—with beaks like this, who needs hands?

The answer to last week’s quiz is Red-winged Blackbird (female).