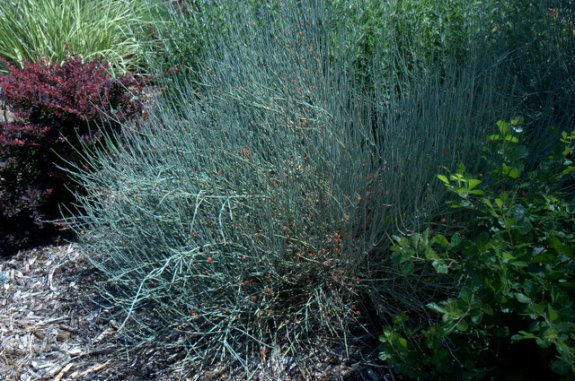 It’s only November, but when it comes to gardening in a cold weather climate, it may as well be winter. From the first sudden freeze, now months ago, the leaves have been brown. For those of us who have gardened in more mild conditions, we crave green, especially evergreen shrubs, but the choices are severely limited. There are the ubiquitous junipers and other dwarf conifers. Yuccas. Firethorn (Pyracantha). Perhaps some Oregon Grape Holly (Mahonia) if you have a sheltered spot so the leaves can avoid desiccation. Even my supposedly evergreen Cotoneaster is brown. But there’s one often-overlooked shrub that stays green all winter—even if it doesn’t exactly have noticeable leaves.

Close up of stems and leaves

Ephedras are variously called “Joint Pine,” “Jointfir” (with or without a space and/or hyphen), “Horsetail Joint,” “Mormon tea,” and “Brigham tea,” odd names for a group of odd plants. The genus Ephedra is the only genus in the family Ephedraceae, which is the only family in the order Ephedrales. Although you’d never guess from a casual look, Ephedras are gymnosperms (e.g., conifers), having pollen-laden yellow “flowers” and seed-filled cones. The various species are native to widely scattered regions, from the Andes to southern Europe and central Asia. 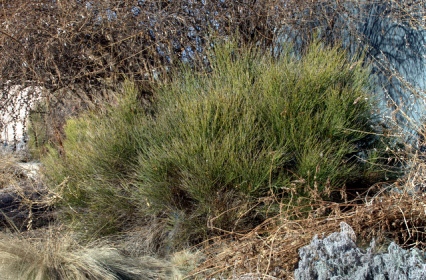 Instead of being covered with foliage, the stems themselves contain chlorophyll. (The leaves are diminished to thin layers of green tissue wrapped at intervals around the stem.) The lack of leaves is an adaptation to extreme dryness (similar to cactus), appropriate for plants that live in deserts. Unsurprisingly, the plants are heat and drought tolerant.

Ephedra viridis is native to the southwestern US, from Colorado and Wyoming to the eastern Sierras of California, it does well at high elevations, and is believed to be hardy to zone 5, although it isn’t often seen in cultivation. It’s also known as Green Mormon Tea or Green Ephedra.

Bluestem Joint-Fir (E. equisetina) has a definite bluish color to its stems. This is the species that is typically used in landscaping. The species originates from central Asia, but it does so well along the Front Range that it was featured as a PlantSelect® winner in 2004. It’s a medium to large shrub (approximately 3 – 5 feet high by 5 – 8 feet wide) with yellow flowers in the spring. Hardiness estimates vary, but you can be fairly confident down to zone 5b, and maybe lower. 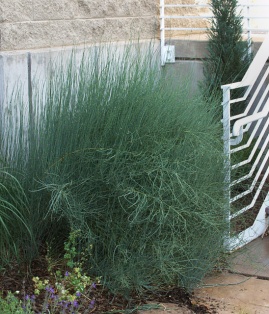 Bluestem Joint-Fir is easy to grow, and makes a good foundation planting, with no moisture worries. In fact, the only requirements are full to partial sun and excellent drainage. Wet roots can be fatal.

In general little maintenance is required. Nothing much bothers these plants, and deer tend to avoid them. However, the plants may reseed, especially in sandy soil, and they can send out runners. As a result, they can become a bit invasive if conditions are too welcoming.

Ephedras are cultivated for another reason. E. sinica, in particular, is farmed for the alkaloids it contains. Ephedrine and pseudoephedrine are used in the drug industry as decongestants and stimulants.