Many plants and animals have either common or scientific names that honor people, often the person who discovered the species, or someone famous. For example, ‘Prince Charles’ and ‘Princess of Wales’ are both rose cultivars. Ornithologist Alexander Wilson named Lewis’s Woodpecker (Melanerpes lewis) after Meriwether Lewis, who discovered the species, and Clark’s Nutcrackers were named after his fellow explorer, William Clark. I find it interesting to learn a bit about the person behind various names, especially of species that I’ve seen and photographed.

I’m taking advantage of our COVID-19 enforced downtime to finally sort through thousands of photos, and I came across these of some Abert’s squirrels. In our previous home, situated as it was in the middle of a Ponderosa forest, we often had these cute little rodents at our bird feeders, mooching seed. Somehow, with their ear tufts, I didn’t find them as annoying as the fox squirrels we usually see. At least they belong here, whereas the fox squirrels were brought to Colorado from the east.

Looking at these pictures of Abert’s squirrels got me thinking about Abert’s Towhee, a large sparrow common in Arizona and other parts of the southwest. And that got me wondering who this Abert was. So I looked it up.

It turns out that there are two Aberts involved, the father and the son. The squirrel is named after the father, John James Abert. Born on September 17, 1788, this Mr. Abert was a soldier in the early days of the United States, serving in the War of 1812. He eventually became the head of the Corps of Topographical Engineers under the U.S. Secretary of War. As such, he was in charge of mapping what would eventually become the United States west of the Mississippi River. The position was both military and scientific, and Abert was interested in both aspects. John Abert died in 1863. 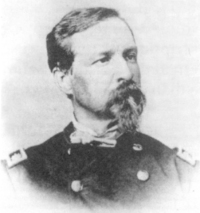 John and his wife, Ellen, had a son, James William Abert, who was born in 1820. He was obviously influenced by his father, as in 1843 he too joined the Corps to explore the west. A bird collector (in those days, birders killed and stuffed their life list birds), he was the first to describe the Abert’s Towhee, which was named in his honor. He was also an artist, sketching the sights he saw on his expeditions. He retired from the army in 1864 after being wounded, and died in 1897.

So there you have it. Discover a new species, or excel in your field, and you too may have a plant or animal named after you.