Two weeks ago I explained how birds manage to have sex. But somehow, there are always those species that make things more complicated. Last week’s explanation applied to 97% of bird species. But a few kinds of birds don’t follow the flock.

Take Cassowaries, for example. Both the male and female have what appears to be a penis attached to their cloacas, although the female’s is somewhat smaller than the male’s. It’s used during copulation, but it doesn’t channel sperm. Instead, after penetrating the female, the male expels his semen directly from his cloaca.

Ducks must need an extra measure of coordination, since copulation takes place in the water. I was somewhat shocked to witness the mating of these Northern Pintails at Nisqually NWR in Washington. He was so aggressive that she ended up completely underwater. 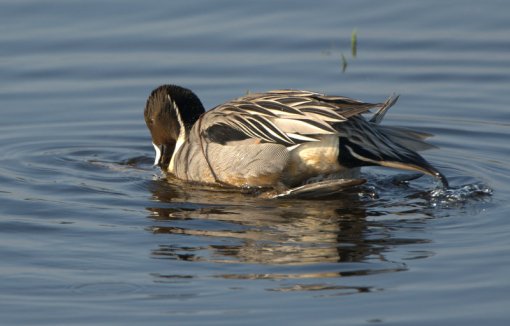 To help them along the way, they have developed some structures unique among birds. Male ducks, geese, and swans have an actual penis, although it only protrudes outside the body during copulation. In ducks, it’s shaped like a corkscrew and may be adorned with spines. It can also be amazingly large. In fact, the Argentine Lake Duck has a penis that is longer than its body! Just as amazing is the fact that male ducks grow a new penis every year.

Being well-endowed doesn’t make for an ideal sex life, however. When the male duck wants to mate, he has to hurry. Rather than being full of blood, his penis is stiffened by lymph, which is only effective for a second or less. Perhaps that’s why the males don’t mess around—they will force themselves on a handy female even if she isn’t interested. There’s a correlation between size and how often the male forces sex—the more the male has to overpower the females, the longer the penis he grows. Once the male is properly position, his penis is propelled out of his body with explosive force, inseminating the female in the blink of an eye. (There’s a video of this on YouTube, if you’re curious.)

However, don’t get too concerned about the female ducks. They have their revenge. The females have corresponding spiral-shaped vaginas, only theirs are “anti-spirals.” You’d think this would be counterproductive, making mating more difficult, and it is. In fact, that’s the point. Only the strongest males are able to mate and contribute their genes to successive generations.

Furthermore, her vagina has various side openings leading to dead ends. If the female accepts the male, everything proceeds as for other species. However, if she’s being forced against her will, she’s able to divert the male’s sperm into one of her vaginal outgrowths, preventing it from reaching her eggs. Forced mating only results in baby ducks about 3% of the time. So while selection favors the strongest males, it also allows the females to choose the fittest mates.