Last month I wrote about Scotch Thistles, a noxious weed in Colorado and in many other states. Then there are Bull Thistles, Musk Thistles, Plumeless Thistles, and Canada Thistles, also on the Colorado noxious weed list. This begs the question, are all thistles invasive, nasty plants, or are there some good guys among them?

First of all, the species I just listed are considered “bad” because they don’t belong here in Colorado. They’re all native to the eastern hemisphere, where they are kept in check by various pests. Unfortunately, when they moved to the U.S., the pests stayed home, allowing these thistles to run rampant. In their home range, they’re an important source of nectar for butterflies, and the seeds feed various birds such as finches.

But if these are the bad guys, there are native thistles that definitely qualify as the good guys. Like their relatives in Europe and Asia, they provide food for pollinators, seed-eaters, and browsing wildlife. Some are quite beautiful.

While the weeds need to be controlled, we don’t want to be destroying the natives along with the imports. The tricky thing is telling them apart. Here are a few things to look for:

I often run across one or another of Colorado’s 15 native thistle species when I’m out birding. Here are two of them, one from the plains and one from the highest peaks.

Prairie Thistle (Cirsium canescens) Also known as the Platte Thistle, this species is native to the northern plains states, and is easily found in eastern Colorado and along the Front Range from 3,500 to 9,000 feet, especially on disturbed soil. The plants are biennials, forming a rosette the first summer, then stretching to bloom, set seed, and die the next.

Like other natives, Prairie Thistle is relatively short, reaching from 1 to 3 feet in height. The bluish-green leaves are covered with tiny white hairs, thin and deeply indented, with spines along the edges. They’re longest at the bottom of the plant, becoming shorter along the upper stems. The base of each leaf extends downward, wrapping around the stem. A tap root firmly anchors the plant, and allows it to tolerate drought.

From May through August, flowers in shades of creamy white (or rarely pink or purple) offer nectar for bumble bees and other beneficial insects.

Frosty Balls (Cirsium scopulorum) It sounds like an ice cream treat, but “Frosty Ball” is the name of a Colorado wildflower. Also called “Woolly Thistle,” “Mountain Thistle,” and “Alpine Thistle,” this thistle is nothing like the noxious weeds we battle in our gardens. 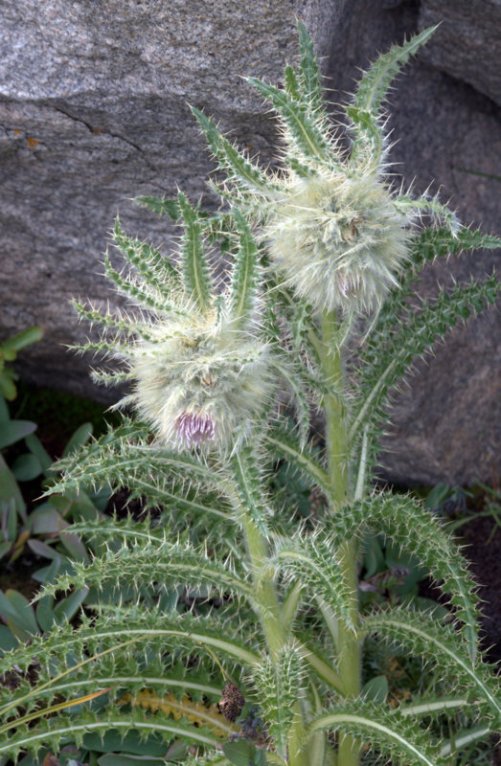 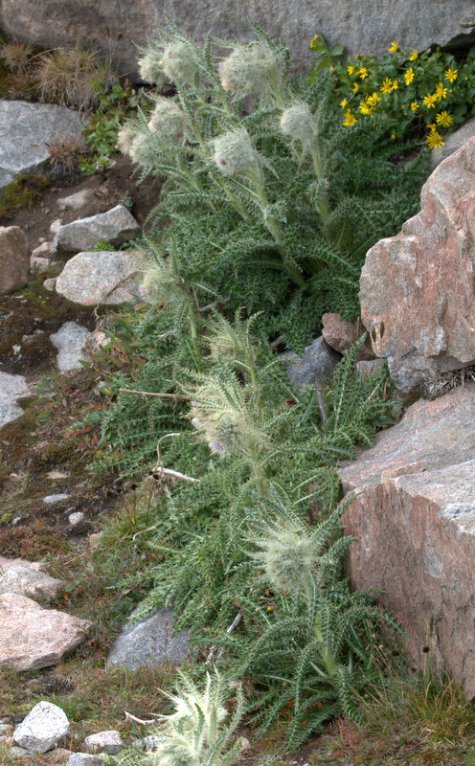 Cirsium scopulorum has a limited range, growing in sub-alpine and alpine zones (9,000 to 13,000 feet) along the Continental Divide from New Mexico to Wyoming. It prefers full sun and moist soil. Look for it above the tree-line, and in boulder fields and scree slopes. Appropriately, the name scopulorum means “rocky places.”

The plants are perennials, growing 2 to 5 feet tall by the end of the short mountain summer. From July to September, the smooth, upright stems are topped with clusters of drooping, white (or occasionally pink) flowers almost hidden by the white, woolly hairs surrounding them. The result is blossoms that indeed resemble white, frost-covered balls. The narrow leaves are bright green and shiny, and may also be covered with white hairs. There’s no doubt that they’re thistles, as impressive spines cover the wavy leaf margins.

When it comes to thistles, there are definitely the good, the bad… (and some are pretty ugly!).