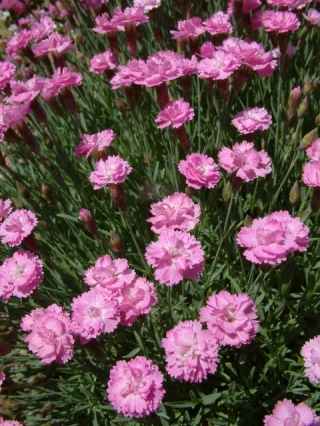 Just as each month is associated with a particular birthstone (January’s being a garnet), so is each month paired with a particular flower. According to folklore, each of these flowers symbolized specific characteristics, which were in turn assigned to those born during that month. While some claim this custom arose with the Roman empire, I suspect that the florist industry might also have had something to do with it.

Well, it turns out that January’s “birth flower” is the carnation. Carnations are on my Top Ten list of flowers. They’re pretty, typically inexpensive, last a long time as a cut flower, and have a scent that I swoon over. Apparently, I’m in good company. Their genus, Dianthus, comes from the Greek for “flower of the gods.” How appropriate! END_OF_DOCUMENT_TOKEN_TO_BE_REPLACED

Heading to the store to buy a dozen red roses for Valentine’s Day? How cliché! Everybody gives roses. Unless you know your sweetie is a rose aficionado, don’t follow the herd—dare to be different! Break out of your routine and expand your horizons. There are a lot of other flowers out there feeling pretty unappreciated right now.

I admit, I really don’t care that much for roses. I would much prefer a bouquet of carnations. They last twice as long—or longer. I think they smell better, too. And there’s something… unassuming about a dozen humble carnations in a plain white vase that appeals to me. (My husband is delighted I like carnations, as they’re much cheaper, too.) You can go for red, pink, white, or a combination perfect for Valentine’s Day, but they come in yellow and orange too. Other colors (green is popular around St. Patrick’s Day) are artificially induced. Placing a white flower in a vase of colored water does the trick.