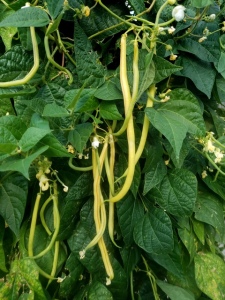 I’m still picking lots of veggies—tomatoes, eggplant, and peppers, squash, beans, chard, and herbs such as basil and parsley. Yet, fall starts in a few days and nights are already dipping into the 40s. That first frost can’t be far behind.

Here in Colorado, it’s now too late to plant most fall crops, as the short days and cold nights won’t let them mature before it snows. You can plant stiff-neck (hardy) garlic, however. Space the individual cloves about six inches apart and bury them about three-times their height. Spread a layer of mulch over the bed and relax. That’s one crop you won’t have to bother with later. END_OF_DOCUMENT_TOKEN_TO_BE_REPLACED

I was wrong. Hard to admit, but there we have it. I passed on advice from those I deemed older and wiser than I am, and they were wrong too. But hey, none of us knew any better. Then.

It seems that the last thing you want to do when planning a new garden is dig.

Yes, we were all taught to plan out where the garden would be, then spread amendments, and likely fertilizer, and dig it all in—at least eight inches, and two feet is even better. Now we’ve learned that the only things we gain from all that work are sore muscles and aching backs.