As I unlocked my  mailbox to retrieve my mail, a cloud of wings billowed out of the opening. My bedside lamp is surrounded by a throng of fluttering insects leaving dark smudges on the lampshade. Every windowsill is littered with gray bodies. The final straw came a few moments ago when I opened the lid on the toilet and discovered a moth convention assembled on the seat. Yup, it’s Miller time.

Actually, the term “miller moth” encompasses more than one species; it simply applies to any moth commonly found around the house. Here in the Pikes Peak area, our most common moth is the adult form of the army cutworm, Euxoa auxiliaris. 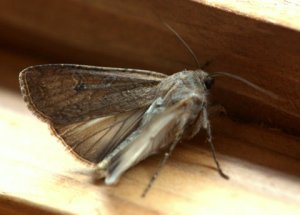 Miller Moths are pretty boring, as moths go. A dull mottled gray and black, they blend in with their surroundings. If it wasn’t for their sheer numbers, we’d probably never notice them. There’s a reason the cutworms are called army worms. They congregate into hordes “marching” across the landscape in vast numbers. Later in the season, these armies become airborne, invading our homes and our lives.

Army cutworm larvae quickly hatch from eggs laid in late summer and early fall. They munch away in the farm fields of eastern Colorado, Kansas, Nebraska and Wyoming until cold weather forces them to hibernate, buried in the soil. When they awaken in spring, they’re ravenous, causing major damage to crops such as wheat and alfalfa, not to mention your backyard bush beans. By mid-spring, the hungry cutworms have grown enough to pupate.

Once the adults moths have emerged from their underground cocoons, they, like many other residents of our neighboring states, head for the mountains. No one is exactly sure why the moths migrate, but perhaps they simply like to frolic in cool alpine meadows, drinking wildflower nectar and taking advantage of the romantic setting to secure the next generation of cutworms. 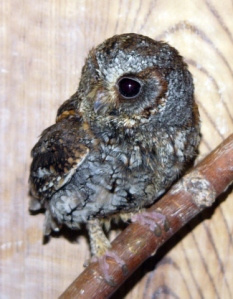 Since the adult moths don’t chew on plants, they merely pose a nuisance to Front Range residents. However, to Flammulated Owls, they are an important food source. These tiny owls, less than seven inches long, make a living catching miller moths (and other invertebrates).

The owls arrive at their breeding range in the Rocky Mountains in late spring, just when the moths are arriving. (They also breed in the Sierra Nevada and Cascades along the west coast, and in the mountains of Mexico.) When the moths leave to make the return trip to the plains in late summer, the owls head for their wintering grounds in Central America. Is this a coincidence?

Next time you open a cupboard and get a face-full of moths, be thankful that you don’t have to worry about losing your livelihood to munching cutworms. Then consider that the moths are on their way to be dinner for one of the most endearing of owls. You might find yourself a tad less annoyed.
—
Owl photo courtesy of Debbie Barnes.

One thought on “Multitudes of Moths”