Q: Why didn’t the Turkey Vulture pay the airline’s luggage surcharge?
A: All he had was carrion.

Frequently portrayed as sinister black birds hunched over a dying cow or feasting on road kill, Turkey Vultures could be the perfect Halloween birds. But are they really as evil (or disgusting) as the image suggests? Get to know them a bit better, and you might be surprised at how interesting these huge birds can be. You might even find them endearing.

Lots of people call them buzzards, but a true buzzard is actually a Buteo, in the same family as our common Red-tailed Hawks. Buzzards are only found in Europe and Asia. The familiar black birds with the featherless red heads that dine on decaying dead animals are in a different family altogether, with the Latin name Cathartidae.

Turkey Vultures are named after turkeys because they both sport red, featherless heads and necks. In the vultures’ case, this makes it easier for them to stay clean while gorging on a bloody carcass. (Male turkeys use their bare skin to impress the ladies, a totally different purpose.) 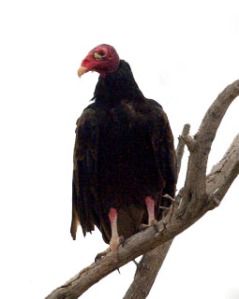 Turkey Vultures find decomposing animals appetizing. In fact, it’s the smell that attracts them in the first place. Since carrion doesn’t begin to smell until it starts to rot, the animal must have been dead for a bit before the birds begin to notice its presence. On the other hand, if the animal has putrefied, the vulture will look elsewhere for a meal. Just like us, vultures prefer their meat aged but not overly disgusting.

I should point out that Turkey Vultures are really pacifists. They do not kill their prey, preferring to find it already dead. As scavengers, they perform a valuable public service. I’m glad they clean up the flattened squirrels and possums we drivers leave behind us.

Vultures are pretty lacking when it comes to social graces. For one, they lack a syrinx (the organ most birds use to make their various sounds). As a result, Turkey Vulture  conversation is limited to grunting and hissing. (I have a similar vocabulary if woken up too early.)

They also have a thing about throwing up. Turkey Vulture chicks are pretty helpless when they hatch, and the parents take turns regurgitating food for them. Apparently, they find this habit-forming. When threatened, both adults and young will barf on their pursuer. Unsurprisingly, this is a pretty effective deterrent. Not many predators will bother a vulture.

Then there’s the issue of temperature control. Like some other birds (cormorants immediately come to mind), Turkey Vultures will hang out in the sunshine with their wings outspread, catching some rays. Their wings make effective solar heat collectors. 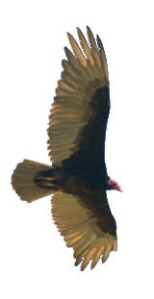 The problem comes when they get too hot. Since birds don’t have sweat glands, they need another way to cool off. Vultures (and their relatives the storks) have come up with a real winner. They defecate on their own legs. I’m not kidding. The moisture in their droppings evaporates, cooling them off. As an added bonus, white uric acid accumulates on their skin, and we all know how sensible it is to wear white in a hot climate. Finally, the strong acids in the droppings act as a disinfectant, handy for a bird that eats rotting flesh.

Yes, Turkey Vultures clearly need an image makeover. But as they gather together in preparation for their migration southward, I’m feeling a bit sad. I’m inspired by watching a bird with a six-foot wingspan as it effortlessly soars overhead. In many parts of the US, vultures stay all year, but here in Colorado, with our cold winters, they are gone from now until the beginning of April. I’ll miss them.