The alarm on my phone chirped into the pre-dawn blackness. My friend Debbie and I both groaned. Between the 18-wheelers on near-by Hwy. 50 and the louder truck parked across the narrow driveway from us—the truck whose owner decided to idle for ten minutes, then rev the engine for another ten, and then finally to drive around the crunchy gravel loop a few times at 2:40 am!—we hadn’t slept at all well.

Still, an exciting day was waiting. We had each signed up for different trips, and mine was headed up Grand Mesa to look for (among other species) Chukar, Gray Flycatcher, Gray Vireo, eight warbler species, and Black-throated and Fox Sparrows. Since several of these would be new birds for me, the anticipation was enough to get me up at 4:30, and into the car by 4:45.

By the time we reached the conference hotel, the darkness had become mere gloom. Part of the problem was the heavy layer of clouds covering the sky. As we sorted ourselves into field trip groups, and then into car-loads, the drizzle started. Still, it wasn’t that bad.

Our first stop, a (normally) arid canyon on BLM land west of town, was promising. My hat kept the rain off my glasses, and a borrowed water-proof jacket kept me sufficiently dry. The main problem was the instant blur every time I pointed my binoculars skyward. I figured that shouldn’t be a problem looking for Chukar, but the warblers would probably be colorful blobs—if I could see them at all. 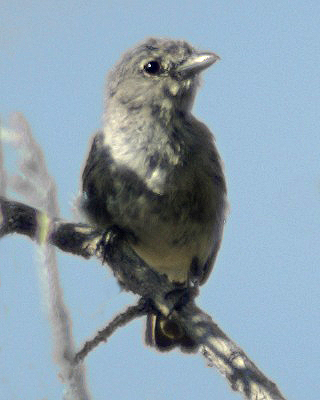 The silt-clay road was a slippery challenge, and I gained several inches in height as my boots became more and more caked with mud. Still, we saw sparrows and a Lazuli Bunting, always a welcome sight! A few minutes later we heard the question-answer call of the Gray Vireo, and finally saw a flash of silvery wings as it bolted from a Pinyon Pine to a Juniper. My first new bird of the trip! Since I didn’t get a photo—I left my camera in the dry car—here is one taken by Jerry Friedman and shared on Wikipedia.

As the rain increased, the birds found shelter. They certainly had more sense than the birders! Our attention wandered to the bright red Claret Cup cactus dotting the canyon sides.

Back in the cars, we headed south. The road climbed. Rain fell harder, and spirits fell with the temperature. Some brief stops along a small river yielded the usual species—Yellow Warblers, an assortment of swallows, a few ducks.

When we got to Vega State Park and reservoir, the rain was half slush and the mud was deep. This was not at all what we’d signed up for! I had carpooled with a couple of birding friends, and we took a vote. It was unanimous. No one wanted to get out of the car to look at Mallards. We watched the more stalwart birders sploosh off, then pulled out our sack lunches and had a party. I hear we missed seeing a Western Grebe, some Canada Geese, and a Northern Pintail. Gee, darn.

Heavy snow made it impractical to continue birding the higher elevations, so the itinerary was revised and we headed back down to the Colorado River. A series of state parks with backwater ponds and covered picnic shelters offered a chance to enjoy some warblers, Bullock’s Oriole, and all five likely swallows (including the Violet-green Swallows at left).

I have to be impressed by our trip leader. He managed to maintain his cheerful enthusiasm for almost twelve hours of some of the most uncomfortable birding I’ve ever experienced. 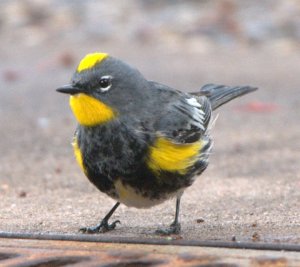 Debbie and I had planned to eat dinner at our campsite before returning to the hotel for the evening program. After all, there was a roof over the picnic table, and the spaghetti was all pre-cooked. All I had to do was start the stove and heat it up. However…

It turned out our much-advertised shelter had small, quarter-inch holes every 18 inches. Maybe they used to have screws in them. In any case, water had no trouble finding its way through the roof. I watched the drops land on the pot of spaghetti, the plates, and us. To ensure complete saturation, we were getting sprayed by gusts of rain-laden wind. The temperature hovered around 40°. We looked at each other—and went out for pizza.

The conference’s evening program was a very challenging bird quiz. In round one, each team had to identify the birds in a series of photos. In round two, the photos were swapped out for audio recordings. Some of the posers included a leucistic Yellow-headed Blackbird (with black or white feathers, but nothing yellow anywhere), an Empidomax flycatcher with a deformed bill, and a Red-throated Loon in its winter plumage. The audio round confused us with Mountain Bluebirds, Blue Grosbeaks, and Cooper’s Hawks. I quickly realized I was completely clueless, only getting two of the ten puzzles right, but I learned a lot from the luminary birders in the room, and we enjoyed a lot of laughs.

Then it was back to our soggy campsite and the local truck mechanic. Sure enough, rain wasn’t enough to deter him from making his sleep-spoiling middle-of-the-night rounds. The inch of foam under me felt harder than ever. It was with a bit of  surprise that I realized, as I dozed off (again), that I was having a wonderful time.

(Stay tuned for the conclusion next time.)