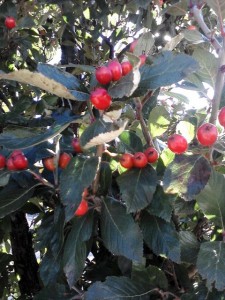 “Deck the balls with boughs of holly” might work well in Merry Olde England, or even in the eastern U.S., but it’s not very practical at my house,  just north of Colorado Springs, Colorado. We have too much sunshine, the air and soil is too dry, and our soils are too lean and too alkaline. Holly won’t survive winter’s dessicating winds. At least, that’s what I learned when we moved here.

So imagine my surprise a couple of weeks ago when I was out for a walk in a near-by subdivision, and there were two bushes, covered with green leaves and red berries, planted in the strip of soil between the sidewalk and the street. Could it be?

At first, I just assumed that they weren’t holly. After all, doesn’t holly have leaves with sharp points on the tip and edges? I’ve been drawing holly leaves since kindergarten, and these looked different. They were smooth all the way around. But those red berries…. I took these photos (unfortunately, my phone doesn’t do macro very well) and collected a couple of berries. Maybe I could identify it later.

Back home again, I researched all the evergreen bushes with red berries that are supposed to do well here. The list was very short. Cotoneaster. Firethorn (aka Pyracantha). Oregon Grape* (Mahonia). Um… That’s about it. And the plant I had seen was none of the above.

My mystery bushes were finally identified by accident. I was doing some research for another article and stumbled across a photo of a large green bush with red berries—just like the ones I saw. And sure enough, they were hollies. Astonishing!

So I learned something. Not all species of holly have those poky prickery leaves.

Of course, now I want some holly bushes of my own. An article on the Colorado State University Extension website isn’t very encouraging. All those reasons why holly doesn’t grow here are listed along with a warning that attempting to grow holly will only lead to disappointment. However, if you’re really determined….

Begin by choosing the right holly. Of the hundreds of holly species found all over the world, only one is recommended for desperate Colorado gardeners. Actually, it’s a hybrid between a cold hardy species with less-than-attractive foliage (Ilex rugosa), and a lovely leafed but wimpy prima donna (Ilex aquifolium or I. cornuta). The result, Ilex x meserveae is a popular nursury plant with the named varieties ‘Blue Boy’ and ‘Blue Girl,’ and ‘Blue Prince’ and ‘Blue Princess.’

As the names indicate, hollies have separate male and female plants. The males are needed to produce pollen so that the female’s flowers can grow into berries. Your male plant can support a harem of up to five female plants.

These cultivars will grow up to ten feet tall. Their evergreen foliage has a blueish cast, and the inconspicuous flowers that preceed the berries are white. Their hardiness is subject to opinion; various reliable sources list them as surviving to USDA zone 5, or possibly zone 4, or maybe only Sunset zone 3 (which is much warmer than Colorado).

As you might expect, success with holly takes some dedication. Choose a sheltered location in light shade to full sun. If your soil is typical Colorado dirt, add a couple inches of organic amendment such as compost or Canadian peat moss and dig it in to the same depth as the rootball you’re planting. Be prepared to keep the soil constantly damp by watering every few days. A layer of mulch will help conserve water.

Winter watering is essential, as the leaves will lose a lot of moisture on dry, windy days and the roots can’t replace it when the ground is frozen. “Wilt-pruf” or another anti-dessicant foliar spray might help.

Prune only to shape, but please don’t turn these beautiful bushes into gumdrops! Cut out any wayward branches at the point of origin to avoid a sheared look.

We aren’t the only ones who enjoy holly berries. Catbirds and thrushes, such as robins and bluebirds, will gobble them down. Consider their share your Christmas gift for the birds. At least you won’t have to share with Rudolph. Holly is deer resistant.
_____
Most Mahonia berries are blue, but some kinds have red berries.

One thought on “Ho, Ho, Holly”