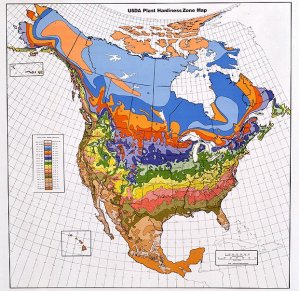 After all the bustle of the holidays, I finally have a chance to brew a cup of tea, snuggle into my favorite chair, and open that stack of garden catalogs I’ve been accumulating. As I skip past the annual seeds and browse through pages filled with gorgeous photos of lush, evergreen shrubs and flowering trees, the frustration begins to build.

See, they have this little box, usually inside the front or back page, or perhaps on the order form. It has a map of the U.S., with colored bands forming a predictable rainbow in the east, but looking a bit more chaotic in the west. This map tells me that most of the plants in the catalog will not survive my Colorado winters.

Prior to 1927, there was no standardized scale by which to gauge a plant’s hardiness. That was the year that Alfred Rehder published his Manual of Cultivated Trees and Shrubs. He included a map dividing the country into eight zones, based on the lowest mean temperature of the coldest month. He then identified the coldest survivable zone for every plant in his book.

In the years since Rehder’s book, newer and more detailed maps have been created. The most recent, published in 1990 by the Department of Agriculture, is based on data from 14,500 weather stations throughout North America and Hawaii—twice as many as the previous map from 1965.

The Plant Hardiness map is divided into eleven zones, based on average annual minimum temperatures, in ten-degree increments. The numbers range from coldest to warmest, with zone 1 bottoming out at -50°F and zone 11 having a minimum or 40°F. Additionally, each zone is divided into “a” and “b” sections, with “a” being the colder half, and “b” being the warmer half.

To give some concrete examples: Fairbanks (Alaska) is zone 1, Colorado Springs is zone 5, Dallas is zone 8, and Honolulu is zone 11.

Some catalogs also include the AHS Plant Heat-Zone Map. Created by the American Horticultural Society, it helps gardeners know which plants are more heat-tolerant than others.

Both maps work the same way. Locate your garden spot on the map, then check the key to find which zone applies. This is easy in the east, where temperature extremes are largely based on latitude. Mountains in the west make it much more difficult to delineate the zones. (I’m still trying to decide if that sideways bump if the middle of the Colorado map is Pikes Peak.) Still, if you’ve lived somewhere for a while, you probably have a good idea of what your winter temperatures are like.

I use the hardiness map as a general guideline. Some parts of our property are more sheltered, with reflected heat from a paved area and south-facing walls. I can grow plants there that won’t survive in the rest of my yard. Also, if the plant is a cheap perennial, I’m more likely to take a chance than if I am buying a $200 tree. In fact, I subtract an extra zone for expensive plants, just as insurance.

While extremely helpful, hardiness zones aren’t the whole picture. One major issue, here in the middle of a continent, is our abrupt temperature swings. A tree that can easily handle 10° in January will die if we hit that low after weeks of balmy weather in early October or late May.

Other factors come into play that sometimes trump temperature. When we first moved to Colorado, my husband asked if we could finally grow blueberries. He grew up in upstate New York, and had fond memories of blueberry pancakes, blueberry muffins, blueberry pie… . I hated to disappoint him, but blueberries just don’t grow well in Colorado, even though they are plenty hardy. They need acid soils, high rainfall, and high humidity—three things Colorado lacks.

Similarly, penstemons grow extremely well here in our arid climate, but tend to die over the winter in the east. They succumb to soggy soils even though average low temperatures in both places may be the same.

Using a zone map doesn’t save a gardener from making mistakes. It will, however, let me know that oranges, pineapple, and papayas won’t grow in my high, dry garden, while Rugosa roses, yuccas, and yarrows just might.

For more information on the history of hardiness zone maps: http://arnoldia.arboretum.harvard.edu/pdf/articles/807.pdf

One thought on “Gardening in the Zone”