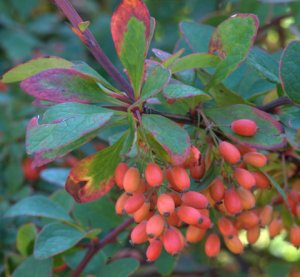 Want to add autumn interest to your garden? Frost has arrived and flowers are finishing their season, but we don’t have to settle for a boring landscape. Even in Colorado, it’s possible to create a garden that is beautiful all year.

Colorful foliage is everywhere this time of year, but there’s more to fall than just leaves, no matter how spectacular they might be. Look for bright berries, persistent seedheads, and even colorful or thorny bark and branches. 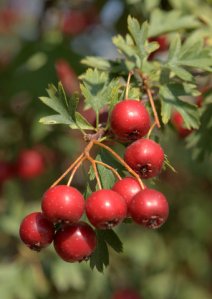 A recent visit to the Denver Botanic Gardens demonstrates the variety of options available to us. While late-blooming flowers were still in abundance, it was the berries and other fruit that really caught the eye. Bright red rose hips were just as decorative as the blooms they followed. Japanese Barberry branches (top photo) were loaded with flashy oblong, orange-red berries. Other trees and shrubs with red fruit included crabapples and  Russian Hawthorn (a close relative, right), viburnum (including one species affectionately known as “Mooseberry”), and cotoneaster. Even prickly pear cactus had florid, swollen red stems beneath the scars from summer’s flowers.

Not all fruit was red. Crabapples come in yellow, Snowberries are white, and elderberries are dark blue. My favorite was Amethyst Coralberry (left), a North American native. It formed a tidy shrub several feet high and wide, covered with lavender-pink berries. The blue-gray needles of a nearby dwarf Blue Spruce provided the perfect complement.

Plants that produce fruit do more than look pretty all winter. They provide a much-needed source of food for birds and other wildlife. Insects are scarce or absent during the cold months, and many species must trade in their summer bugs for winter berries.

Probably the main drawback with fruiting plants is the mess that can accumulate underfoot, making them a poor choice for edging patios and walkways.

As the last flowers of summer fade, they leave behind some pretty remarkable seedheads. Ornamental grasses might look nice in just their foliage, but they earn their place in the garden when they put up tall spikes of wind-pollinated flowers. As the weather cools, many varieties turn golden, silver, or even a rich russet-orange, and the dried seedheads last all winter. The photo illustrates Silver Grass (Miscanthus sinensis ‘Adagio’). 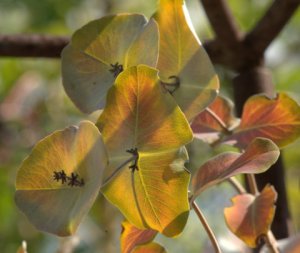 Many perennials should be left in the garden, flowers intact. Sea holly, yarrow, statice, and other plants typically sold as dried flowers look just as good outside as in a vase. A new vining honeysuckle with the whimsical name of “Kintzley’s Ghost” (right) has large round bracts around each clump of blooms. When the flowers fade, the bracts dry from gold to silver, enclosing decorative red berries attractive to birds. (The berries are missing in my photo; I assume they were eaten!)

Goldenrain Tree has flashy seedheads too, and on a much larger scale. Showy yellow flowers in July are followed by three-sided pods that hang on for months. The trees do well along the Front Ranges under 6,000 feet, tolerating drought and alkaline soils.

Some plants don’t need leaves or fruit to look attractive. For example, Redtwig Dogwood is welcomed for its crimson stems while Ninebark gets its name from its may layers of peeling bark.

With so many choices, there’s really no excuse for having a boring yard for most of the year. A stroll through a public garden (or just around the block) will provide plenty of inspiration. Just remember to write down the names of the plants you like, so you can remember what to buy come spring!