It would seem that the El Paso County (Colorado) parks department needs to take some birding classes. Look closely at the sign in the next photo.

While many kinds of animals have a wide assortment of common names, birds (at least here in North America) have been assigned one, and only one, common name. This makes it nice and easy for us birders, as it avoids confusion. A side benefit is not having to try and pronounce a Latinized genus species (although some common names are just as difficult as anything we might see in Latin—Phainopepla, Prothonotary Warblers, and Pyrrhuloxia come to mind).

Some birds, however, have vernacular common names in various parts of the country. Turkey Vultures are (incorrectly) called Buzzards, Anhingas are sometimes referred to as Snake-birds, and my mother-in-law calls the Northern Cardinals in her Louisiana garden “Redbirds.”

It turns out that Dark-eyed Juncos are occasionally known as White-tailed Sparrows, at least according to Florida’s Birds: A Field Guide and Reference, by David S. Maehr, Herbert W Kale and Karl Karalus. However, Juncos are far from rare around here—so if they’re referring to a Junco, the sign is still incorrect. 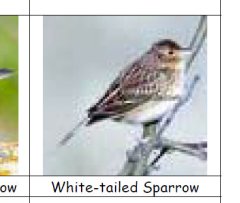 I dug a little deeper and discovered the ever-so-helpful Pocket Field Guide –
Landscaping for Wildlife: Common Birds of Kentucky, a publication of the Louisville Water Company. They not only include a “White-tailed Sparrow” in their guide, but they have a photo of it! I was unable to correctly ID the bird (as you can see, the photo on page 7 is less than ideal), but it’s clearly not a Junco. If you know what bird this really is, I’d love to know.

The guide also lists a “Turkey Buzzard” on page 11. The bird in the photo looks like a painted ceramic Turkey Vulture but with bright red legs and feet. The next bird shown was a real Turkey Vulture along with the proper label, followed by a Black Vulture, so that was a bit odd, to say the least! 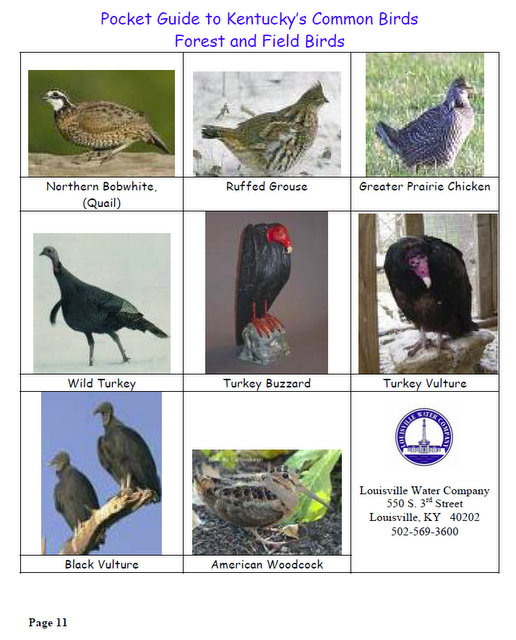 Maybe we need to focus a tad bit less on the birds, and a bit more on educating the public about them. You think?

One thought on “Rare Birds Indeed”