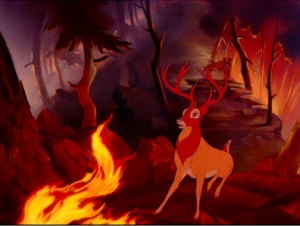 It’s hard to imagine 14,280 acres of burned forest, or 509 houses totally destroyed. While the human toll is devastating, I started wondering what happened to the wild animals that also called Black Forest home. Maybe that’s because I still have that scene from Bambi in my mind—the one where all the animals are fleeing the forest fire. Is it accurate? What do animals do in a fire? Do they survive? And if so, how?

Black Forest is home to a wide variety of wildlife. Mammals include bats, various rodents (including an abundance of squirrels and an occasional porcupine), skunks, , raccoons, rabbits, foxes and coyotes, elk, deer, and pronghorn, and even an occasional bear, bobcat, or mountain lion. Lizards and garter snakes are common, prairie rattlesnakes much less so. Then there are frogs, toads, and other amphibians, plus over a hundred species of birds. The wildlife is one of the reasons we love living here.

Now that we’re back in our house, I’ve refilled my feeders and bird bath and my yard is once again full of birds. But my week-long absence didn’t hurt them at all. While they appreciate our handouts, birds are used to food sources coming and going. They typically derive only about 10% of their food from feeders. I wasn’t all that worried about the birds anyway. They can fly.

On the other hand, June is prime nesting season here in Colorado, so I’m sure a significant number of nests were destroyed. The parents would have left when conditions became unbearable, but the eggs and young would have died. We’ll learn more about how the fire affected the birds when we do this winter’s Christmas Bird Count.

Some species will be harder hit than others. Animals that burrow hide underground while the fire passes overhead. In most places, the fire was probably not hot enough to heat the ground very deep. (In areas where the trees were very thick, the fire was so hot that it’s doubtful anything survived.) I expect we still have plenty of pocket gophers, mice, and snakes.

Those who can run, run. The larger mammals may be able to outdistance the flames. Then they have to find a new territory. This explains why a friend of mine recently looked out her window to see this bear on her back deck!

Squirrels and porcupines can survive a ground fire, but not one where the flames climb up to the crown of the trees. Because many Black Forest homeowners had diligently pruned off the “fire ladders” (those dead branches left behind on the lower trunk as a pine grows), much of the fire here was a ground fire.

Because the fire was pushed by such strong winds, the burned area is somewhat elongated. The healthy forest on either side is full of wildlife that will take advantage of the unoccupied territory. Coyotes, foxes, and raccoons will move into the burned areas, seeking dead animals that they can eat. There will be more food in the future, too. The overgrown areas, where trees grew much too close together, are now gone, leaving sunny open spaces for berry-producing shrubs, seedy grasses, and other forbs.

In 1988, a tremendous fire swept through Yellowstone National Park. We can learn much by what happened afterward. Many animals died—including several hundred elk, plus bears, deer, and moose. Some species were hard hit, and their populations shrank. Other animals thrived. Deer mice benefited from an increase of open areas full of grasses, which provide seeds and insects for them to eat. Populations of birds that require mature forests fell, while other species moved in to take their place.  I expect the same thing to happen here.

Our yard has become a green oasis not very far from a large burned area. I expect some interesting visitors. Yesterday I noticed a garter snake in the bushes by my chicken coop. I hope it’s eating the mice attracted to the spilled feed! I moved all my hummingbird feeders to our second story balcony in case bears show up, and I double-checked the fencing that protects my vegetable garden from rabbits. Now I just need to set up my camera so I’ll be ready when that coyote poses by the flowerbed.
____
For more detailed information see “Fire, Drought, Beetles, and Birds,” by Cornell’s Project FeederWatch.