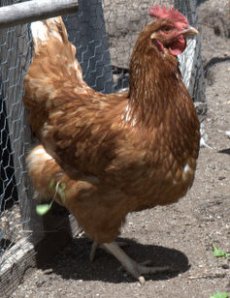 Our forced evacuation dragged on and on. Glued to the news, we prayed for the firefighters, for those losing homes, for protection for our own home. So far, the closest the flames had come was about three blocks. Thank you God!

On Thursday we called the Humane Society to ask if there was any way to rescue my chickens. I realized they were lower priority than horses, dogs, and other pets and livestock, but maybe if someone was in the area anyway? I was sure they had used up their food and water by now.

Thankfully, a wonderful volunteer with Pikes Peak Animal Rescue was able to provide food and water, although my ladies had to stay in their coop. All right, good enough.

Sunday afternoon we were finally able to return long enough to see how our home had fared. With the searing temperatures, wind, and lack of irrigation, I was sure that most of my garden had long ago shriveled up and blown away. Maybe the tomatoes, with their deeper roots, had survived—maybe. I expected dead herbs in their pots on our balcony. I was sure the plants in the greenhouse hadn’t survived. I steeled myself for the loss, knowing others had lost much, much more. 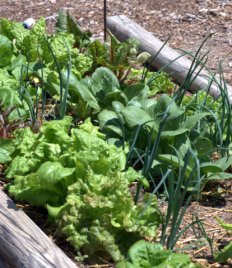 I was shocked. Not only was our small neighborhood untouched by flames (the wind had kept the fire away), everything was fine. Totally, 100% fine. Unbelievable.

To our surprise, the power had been on most of the week. Our deep freeze was still frozen. The refrigerator still held edible produce and unspoiled milk.

The tray of seedlings had wilted, but water restored them. The just-planted seedlings in the garden were thriving. Lettuce and bok choy were ready to harvest. Nothing outside had even wilted. In the areas where I had mulched (around the squash plants and bean seedlings), the soil was actually damp.

It had rained some on Friday, so that might explain the garden, but even the plants in the greenhouse were all right. Those tomatoes had set fruit. The beans and chard were wilted, but perked up as soon as I watered.

Our poor chickens were out of water but still healthy enough to complain vociferously when I arrived with the hose. We even found a pile of eggs in the nest box (somewhat stale but still better than store-bought!).

I might be trained as a master gardener, but I promise my garden isn’t so incredible that it would survive a week of hot, dry weather on its own, especially with so many baby plants. The only explanation I have is that God took care of it for me while I was gone.

Words can’t begin to express how grateful I am. We didn’t lose anything. Close friends are faced with the prospect of rebuilding their lives from scratch, now owning only their car and the clothes they were wearing when they fled the flames. At least now I’m available to help.