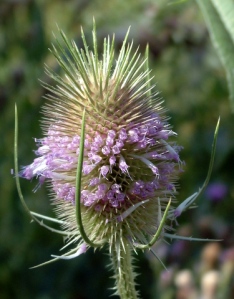 Most of us are familiar with teasel. It grows in most states, including Colorado where it is designated a “List B” species in the Colorado Noxious Weed Act. That means that, if you live in Colorado (or several other states), you need to declare war on any plants on your property. Good luck.

Teasels are easily identified by the spiny flower head left behind after the petals have fallen, as you can see in these photos. There are two species listed as noxious weeds in Colorado—the Common Teasel (Dipsacus fullonum), shown, and its lookalike cousin Cutleaf Teasel (Dipsacus laciniatus). 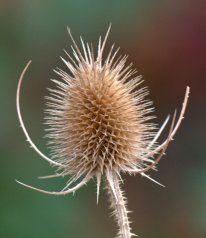 Originally from Europe, teasels were used in the textile industry to raise the nap on fabric. Most factories now use metal cards instead, although some wool processors still prefer teasel’s more fragile spines on, since they won’t tear the fabric. Teasels were also grown as ornamentals and for use in dried flower arrangements, and it’s tempting to include them in our own gardens.

Unfortunately, teasels are also invasive, and their aggressive habits are displacing native vegetation. They prefer open, sunny fields with somewhat damp soil, although they’re also somewhat drought-resistant. The plants are biennials, overwintering as rosettes, then bolting to bloom the second summer. They die after flowering, but can leave behind more than 2,000 seeds per plant! They have a deep tap root which makes removal difficult, and they’ll regrow if you just cut them off at ground level. 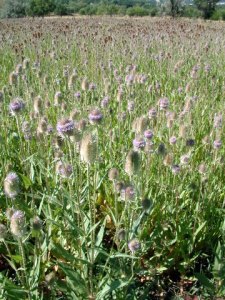 Besides all that, the plants—from flowers to roots—are covered with spines, barbs, and other sharp parts. You can’t blame livestock for not wanting to eat them, or gardeners for hesitating to pull them out.

The best way to get rid of these prickly pests is prevention. Keep existing plants from going to seed, cultivate to get rid of the first-year rosettes, and watch for any new seedlings. Seeds stay viable for up to six years, so constant vigilance is necessary. Keeping your ground covered, with plants or mulch, will help by shading out any sprouts. If you have a large area that’s infested, several herbicides are labeled for use on teasel. Check with the Colorado Department of Agriculture for directions. 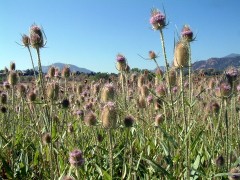 Do teasels have any redeeming qualities? Some people believe they have medicinal qualities, although this has not been proven in controlled studies. In Europe, nature reserves actually cultivate these plants as an important food source for the European Goldfinch. Happily, we don’t need to do that here. Our American and Lesser Goldfinches have plenty of other seeds they can eat.