When we first saw the sign, during our recent visit to Everglades National Park, we thought it was funny. What can a bird do to our car (besides the obvious, I mean)?

Then we looked around. Black Vultures were everywhere—in the trees, on the ground, and yes, pecking at the cars. Most people had used the tarps provided to protect their cars, but one black sedan was left exposed. Perhaps the owner didn’t believe the sign. We watched, amazed, as several birds carefully pecked off all the black rubber around the windows. It looked like they were eating the wipers as well. And let’s not forget the extremely acidic vulture droppings burning their way through the nice, shiny paint job.

We quickly grabbed a tarp and covered our own vehicle, securely fastening the straps around the bumpers. I have no idea how much it would cost to replace all the vinyl and rubber on our car, and I really didn’t want to find out.

Turkey Vultures are huge, with 6-foot wingspans, but in spite of their daunting appearance, they’re pretty shy, scattering as soon as I stop to take a photo.

As you can see in here, Black Vultures, while slightly smaller, are absolutely fearless—even aggressive—hanging around like a gang of thugs that you just don’t want to mess with. They’re not merely scavengers. Turkey Vultures prefer their meat dead, either fresh or beginning to rot. They’re attracted to the stench of decay, and often lead Black Vultures (who lack a sense of smell) to a meal. On the other hand, there are many documented cases where Black Vultures have actually killed the animal they’re dismembering. According to the USDA:

Black vultures mostly kill cattle, though attacks on deer and other wildlife have been recorded. They will occasionally attack adult cows giving birth, but primarily pounce upon new-born calves. … In the early weeks of life, a calf will let vultures approach it. The vultures, when close enough, then attack by grabbing a calf’s eyeballs and pulling them out, blinding the animal. Alternatively, they may grab calves by the nose or the tongue. Once attacked, they go into shock and are easy pickings for the vultures.

A few hours later I witnessed some vultures attack their own species. For some reason, two, and then three birds decided to gang up on a fourth. Jabbing with sharp beaks, grabbing and yanking on feathers and wings, kicking with their sturdy feet, the bullies were determined to drive their victim away. Meanwhile, the poor, picked-on bird simply cowered and endured the abuse. After 30 minutes or so, looking the worse for wear, the losing bird headed off into the sunset, presumably to find another, more hospitable flock.

Curious about this fight, I searched online for an explanation. A document on Audubon’s Corkscrew Sanctuary website mentioned that these birds “will fight savagely between themselves for food.” The fight I saw was definitely savage, but it didn’t look like competition for a meal. I didn’t see anything edible, plus the other birds in the flock were quietly watching the fight from their roosts in a nearby tree. Apparently I’m not the only one to witness this behavior, however. A monograph by Charles Townsend published between 1920 and 1950 describes a similar battle:

“I remarked the vultures frequently attack each other, fighting with their claws or heels, striking like a cock, with open wings, and fixing their claws in each other’s head.”

I just hope they don’t decide to attack us!

With a face only another vulture could love, these aren’t exactly the most popular birds. Yet, they provide an essential function. Without vultures and other carrion eaters, the land would be littered with dead animals in various stages of deterioration. Even worse, if the animal died from a contagious disease, other animals would be at risk. Vultures are willing to eat what most animals reject as inedible. Their bare heads keep their feathers from getting contaminated. Besides the mess they make on your car, the acidic droppings act as a disinfectant. Thus, vultures are able to eat rotting food without getting sick themselves. 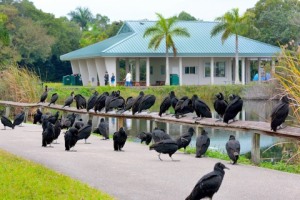 As we observed in the Everglades, Black Vulture populations are growing, and their range is extending northward. As their numbers rise, their interests will increasingly come into conflict with our own. While vultures are protected by the Migratory Bird Act, ranchers can apply for a permit to kill small numbers of birds who are harassing their cattle. Fortunately, studies are currently underway that will provide better data on population numbers and movements, allowing conservationists to wisely manage this valuable species.