As I write this, the temperature outside is 10 degrees. Wind swirls snow into the air and howls around the eaves. It’s hard to believe anything is in bloom. Yet, some Colorado plants choose March as their best time to reproduce. Specifically, many trees are currently in full bloom—and I bet you haven’t noticed.

Unlike the showy flowers we grow in our gardens, the flowers of cottonwoods, junipers, and elms are not designed to attract pollinators. Rather, they rely on wind to disperse their pollen. It’s a hit-or-miss proposition, which is why these flowers produce clouds of the stuff—enough pollen so that some lands on another flower’s pistil, and plenty left over to aggravate our eyes and noses. It’s the flowers you don’t see that are out to get you. 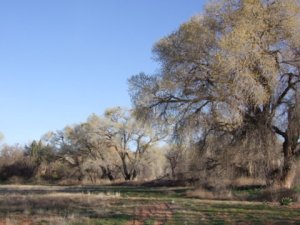 When we think of cottonwoods producing anything, we imagine copious amounts of white “cotton” that gives them their name. But long before June, when white fluff bears seeds far and wide—even before May, when new green leaves burst forth—cottonwoods produce flowers. They look a bit like caterpillars, strung along the branches, but unless we look closely, we’ll miss seeing them.

Cottonwoods are dioecious, meaning that the sexes are separate. The male trees have flowers that produce pollen; the female trees put out flowers that grow into seeds and cotton. By looking closely at which kind of flowers it has, you can tell if a tree is male or female. The flowers shown here are males—the ones that make us sneeze. (The female flowers are reddish and a bit larger.)

Too large for most gardens, cottonwoods drop bushels of leaves in the fall (and, for female trees, produce all that cotton in the spring), completely obliterating the ground below. Old branches tend to break off, posing a hazard to roofs and parked cars. In addition, cottonwoods sucker readily, populating your yard (and that of your neighbors) with dozens of clones.

Riparian trees, cottonwoods require plenty of water. They grow naturally along streams and near lakes throughout Colorado. As one of our most abundant trees, it’s no surprise that they’re a major cause of hay fever.

Juniper
When I first moved to the Colorado Springs area, more than twenty years ago, it seemed that the only plants people chose for their yards were junipers. Of course, I know better now—many attractive trees, shrubs, and flowers do quite well here. Still, grass and rocks and junipers comprise plenty of landscapes around town, and for good reason.

Junipers are extremely easy to grow, surviving on little water once established, living for years, and generally outgrowing whatever space they were supposed to occupy in our yards. Their ever-present foliage is a plus. It may not stay green—some turn a peculiar plum color in winter—but at least they’re not bare.

They come in a wide assortment of sizes and shapes, from soil-hugging groundcovers to huge shrubs dwarfing the houses they’re supposed to be complementing. The native Rocky Mountain Juniper is a small tree that usually grows mixed with pinyon pine along the western edge of the city. It’s important to start with the right-sized variety, as pruning usually ruins the look of the plant. 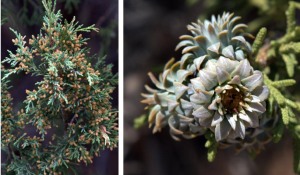 Junipers, with their steely-blue berries, provide birds and other wildlife with food all winter. But did you stop to think that those berries grow from flowers? Just as with cottonwoods, juniper plants are either male or female. The male flowers (the left photo) produce pollen—also a significant allergen—while the female flowers, once pollinated, grow into berries.

Other trees are early bloomers. American Elm, Box Elder, and alders also bloom in March and/or April. In May, aspen (top photo), oak, maple, and other hardwoods join the crowd. The next time a late blizzard makes you wonder if spring will ever arrive, remember that for some plants, it’s already here.