I was out birding last weekend, scanning the foliage for a glimpse of feathers or the movement of a leaf unexplained by the light breeze, when I heard a high-pitched twit twit. It was a familiar sound, but one I hadn’t heard since early last fall—the call note of a hummingbird!

If I was in Colorado, I’d be quite surprised to find a hummingbird this early in the season—my first Broad-tailed hummer consistently shows up at my feeders on April 30 or May 1. However I’m not in Colorado, I’m currently in Washington. I was birding at Nisqually National Wildlife Refuge, located between Olympia to the west and Tacoma to the east. (My trip includes a little bit of birding and a lot of our new baby granddaughter!) 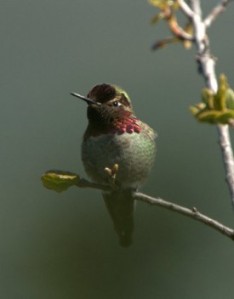 Historically, Anna’s Hummingbird did not venture this far north, much less spend the winter. Until the 1930s, the species was limited to California, from San Francisco southward. However, by 1964 the bird had reached Seattle, and now it’s found as far north as Alaska. What caused this northward expansion? People!

To a large degree, Anna’s Hummingbirds can winter as far north as Washington because we feed them. While hummingbirds get most of their nutrients from the insects hiding on the flowers they visit, the presence of hummingbird feeders and the planting of exotic, winter flowering ornamentals provide enough of a food supply to support a year-round population. (Some ornithologists include climate change as another contributing factor.)

Anna’s Hummingbirds may not be the only hummingbird expanding its range. Seventeen species of hummingbird breed in the United States—are they also claiming a larger piece of turf? If so, why?

Furthermore, are changes in climate affecting the bloom period of plants migrating hummers depend on for food? If so, do these changes pose a danger to the birds’ survival?

To answer these and other important questions, the National Audubon Society has launched a new citizen science project, “Hummingbirds at Home.” As you and thousands of other volunteers enter your hummingbird sightings into Audubon’s database, scientists can analyze this data and determine trends in hummingbird populations, and their likely causes.

This large-scale initiative should greatly increase our knowledge of some of nature’s most popular birds. The more people who sign up, the more complete the data will be. It’s exciting that we can all make an important contribution, even if we only have a few hours to give. I urge everyone to participate!

Audubon’s Hummingbirds at Home website has more information and a link where you can enroll.