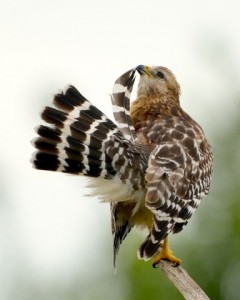 My camera was aimed at a Red-shouldered Hawk perched high in a tree, diligently preening its tail feathers. The angle was awkward—too far and the bird was a mere speck in the picture, too close and I was looking at the bird from below. I slowly backed up, trying to fill the frame and still capture the action. Intent on getting the shot, I stumbled over something behind me, and turned to see what was blocking my way. Oops! I’d tripped over an alligator!

Lucky for me, it was a relatively small alligator, perhaps six or seven feet long, and sound asleep in the warm sunshine. As my adrenalin levels receded, I made a mental note to pay more attention to my surroundings. After all, I was birding in the Everglades! 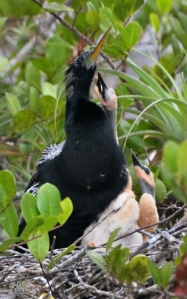 Most visitors to the park enter via the city of Homestead and head for the Royal Palm Visitor Center. That’s well worth a stop, with plenty of fearless birds to keep your attention. When we visited in early January the Anhingas were nesting, and little heads on long necks snaked up to beg a tidbit from Mom or Dad. You can also continue southwest to Flamingo, where you’ll find another Visitor Center, marina, and campground.

But there’s another piece of the Everglades that many tourists seem to miss—Shark Valley. It’s farther north; you access the area from the near the midpoint of the Tamiami Trail, a highway that bisects the state.

We didn’t see any sharks in the fresh water and it’s not really a “valley” —the wide, completely flat, paved main trail runs along a perfectly straight canal for several miles. You can reserve a spot on one of the free trams that run back and forth, with a park naturalist providing a running explanation of what you’re seeing. I chose to walk, since of course I had my camera. Even though I was there all day, I didn’t get very far. There was just too much to see in the first mile! 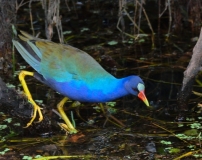 The birds were the usual culprits: herons and egrets, cormorants and Anhingas, ibises and Wood Storks. The back side of the trail (away from the canal) was full of Palm Warblers and other little brown jobs. I was excited to see a Purple Gallinule  poking among the floating vegetation at the water’s edge, and I’ve already mentioned the nesting Red-shouldered Hawk. 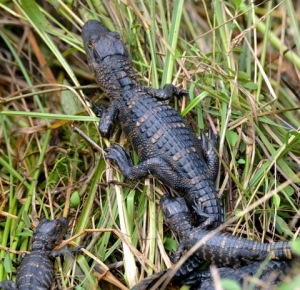 Being January, I’m guessing that the water in the canal was cooler than the 80 degree air, because dozens of alligators littered the trail, soaking up the sun. I counted 49 gators in a quarter mile (including the one I accidently stepped on). A highlight was a mama with her babies. A ranger stood guard, as alligator mothers are quite protective of their young. I learned that the babies stick with mom for the first few years as she defends them from predators, including other alligators. 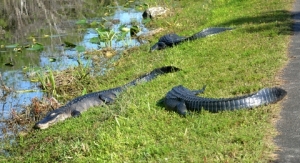 As I’ve always had a healthy respect for alligators—they can run 15 mph!—I was surprised that no one seemed particularly concerned as we stepped over and around all the basking bodies. The ranger explained that there were plenty of fish in the canal, so they weren’t hungry. Plus, it’s much easier to swallow a fish that goes down in one gulp, than to drown a large mammal (meaning us), and then have to stash it under a submerged log until it begins to decay and can be pulled apart into individual mouthfuls. Ewww. How reassuring.

If you’re out for photos, try to arrive at Shark Valley in the morning, especially during the shorter days of fall and winter. The trail runs north/south, and the water is on the west side. After noon, the birds are mostly shaded. The park gate opens at 8 a.m. but you can leave your car at the entrance and walk in at any time.