A few years back I wrote an article about the Duck Stamp, formerly known as the Migratory Bird Hunting and Conservation Stamp. (I like “duck stamp” a lot better!) Hunters need to buy the stamp to hunt ducks, and the money goes to purchase and maintain ducky sorts of habitats, with lots of water, good cover, and nice slimy plants to munch. You may know these places as National Wildlife Refuges (NWRs).

I only hunt ducks with my camera, but I too buy a duck stamp every year. They’re only $15, and the money goes to support conservation, something I highly approve of. In a miracle of government efficiency (is that an oxymoron?), 98% of the funds raise actually go to the purchase of bird habitat! I’d like to elect these officials to congress!

sides benefiting wildlife, a Duck Stamp will get you into any NWR fee areas for free. Granted, most of these birding hotspots are free or amazingly cheap, but if they do want another three or four dollars from you, you can just write down your stamp number and you’re in. That makes my ego feel special—like I’m a member of an elite club.

Wildlife refuges are one of the government’s better ideas. I’ve gotten many of my lifer birds at one or another refuge, and plenty of photos. In fact, I used to be a volunteer docent at one!

Pete and I enjoy the occasional road trip. To the uninitiated, our route looks a bit odd, zigzagging across the country in a more or less random path. Why do we end up in such out of the way places? Usually, it’s because there’s a refuge (or six) I want to visit. Pete, a non-birder, is a remarkably good sport about all this. 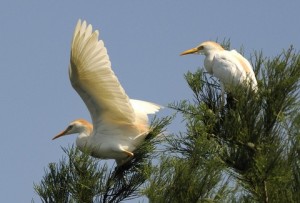 Just the initials NWR make me think of murky irrigation-type canals and square ponds intersected by raised dikes, dirt auto routes, and thousands of midges swarming in and out of my open windows. My windows are open so I can stick my lens out of them and take photos of all the birds. The car makes an excellent photo blind. To me, this is ideal vacation fodder.

It’s a good idea to check ahead. Every refuge has some sort of website, often with a “current conditions” button. In many places, the wetlands are seasonal, and it’s pretty frustrating to drive a hundred miles out of your way just to discover that the ponds are cracked mud.

Just as an example, one of my favorite refuges is the Sam D. Hamilton Noxubee NWR. It’s in The Middle of Nowhere, Mississippi. We took a lovely, newly paved divided highway northward through the middle of the state, then turned off into parts of Mississippi I had never even imagined. As our car crept through towns straight out of the 1930s, the people on the sagging porches stared at us as if we were from a foreign country—or planet.

The refuge itself included a boardwalk through a flooded cypress forest, a lovely, large lake, a visitor center, and a smattering of people fishing. We were there in mid-June, and maybe a hundred Cattle Egrets were busy building nests on the far side of the lake, and we amused ourselves trying to snap photos of them in mid-flight.

I slathered on a thick layer of mosquito repellant and ventured off down the boardwalk, while Pete took a nap in the car. Once under the cypress leaves, I felt a million miles away, lurking through a dark and dismal swamp while small birds flitted through the trees. I finally got my binos on one and scored my first Prothonotary Warbler. Lifer!

En route from Tennessee to New Orleans, we ended up at Noxubee in the middle of the day. That was definitely not the best time to visit; as most birders know, the early birder gets the bird.