I haven’t been birding much this summer. Finding time was difficult since I’m now at least somewhat gainfully employed. What time I did have was spent learning new plants. I found myself staying up much too late to get up before dawn, especially around the midsummer solstice. Added to the hot weather, the hurdles seemed insurmountable.

The few times I did go out, I didn’t see many birds. Nests had been built, nestlings were demanding more and more food, and the poor birds didn’t have the time or inclination to sit on a branch and sing.

Happily, however, some birds came to me. Our daughter’s father-in-law made me four lovely bluebird houses that I hung in different spots around our five acres. A couple of widely-separated boxes faced a large field and another was hidden among the pines. The fourth my husband hung on a huge Ponderosa right next to our gravel driveway, facing our house. In my opinion, the location wasn’t private enough, but he didn’t have time to move it and I never got around to it. Oh well, maybe next year, I thought.

As expected, a pair of Western Bluebirds (above) immediately moved into one of the nest boxes facing our open space. That’s their preferred habitat—the interface between forest and field. They got right to work, and soon I could hear muffled cheeping coming from the baby birds while the parents were frantically trying to keep up with the demand.

Since bluebirds are territorial, I wasn’t sure if another family would occupy the box at the other end of the field. Apparently, they were too close together, even though I spaced them as far apart as our property allowed. Instead, a House Wren claimed the spot. It was fun watching the wrens build their nest. One wren seemed determined to get a large, branched twig through a small hole. He or she persisted for days, never quite learning how to orient it for easy entry. When one twig was lost in the groundcover under the tree, the wren would appear with a new twig—looking much the same as the previous one. I’m surprised the nest ever got built!

The Cornell Lab of Ornithology website had an interesting fact about nesting House Wrens:

As the season progresses their nests can become infested with mites and other parasites that feed on the wren nestlings. Perhaps to fight this problem, wrens often add spider egg sacs into the materials they build their nests from. In lab studies, once the spiders hatched, they helped the wrens by devouring the nest parasites.

As you might imagine, I’m a bit hesitant to clean out the now-deserted box, seeing how much I “love” spiders!

I never saw any birds use the box in the trees. Maybe it wasn’t anyone’s cup of tea, or perhaps the residents were so secretive that I just didn’t notice them. (It was hard to see the box from the house.) I guess I’ll find out when I go to clean it out later this fall.

The big surprise concerned the box facing the driveway and house. In spite of its totally exposed location, a pair of Violet-green Swallows took over and raised a family. For a week, we watched them bringing nesting materials to the opening. Then some eggs were laid (I didn’t peek, so I don’t know how many). For weeks, one parent would fly circles around the open space between the house and nest, grabbing flying insects from mid-air, and then deliver them to the other parent sitting on the eggs. I was thrilled to have our personal exterminators flying mosquito duty—according to Birdnote.org, swallows eat an insect per minute, or 850 per day! 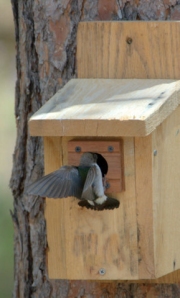 At some point we realized that the eggs had hatched. Now both swallows could be seen catching insects, bringing them into the box to stuff them into their young. The activity grew more and more frenetic as the babies grew. The parents stopped going into the box, and just stuck their bug-laden beaks in to deliver dinner. We guessed that the babies were getting larger, leaving no room for mom or dad.

Then, one day the birds were gone. The brood must have fledged, and the nest box was no longer needed. I missed seeing the beautiful purple and green birds patrolling our driveway, and I’m hoping they’ll be back next year. I plan to leave that nest box just where it is!