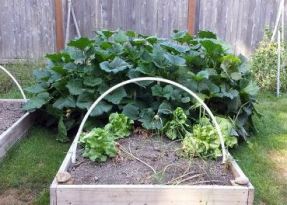 One of our daughters lives north of Seattle, where plants like to grow. She just called, all excited to tell me about her veggie garden. It seems that last year she planted six zucchini seeds, and none of them survived. She was a novice gardener and planted the seeds too deeply. Then, the  local rabbit population gnawed off the two sprouts that managed to reach daylight. 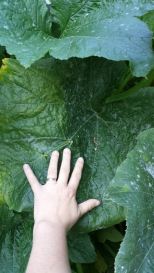 This year, a bit wiser, she decided to try again. There were a dozen seeds left in the packet. Assuming that she would get a similar germination rate as the previous summer—after all, these were old seeds, right?—she went ahead and planted all twelve seeds. Yes, twelve. Even better, she planted them six inches apart along the 4-foot wide end of her raised bed!

You guessed it. Ten of the twelve seeds sprouted and rapidly grew into vigorous, prolific squash plants. Did I mention that she only has a small, 4 x 8 foot raised bed? You can see her monster zucchini plants in these photos. (That is one huge zucchini leaf, and her hand for comparison!)

Last August I posted an article titled “Too Much Zucchini?” It included three recipes calling for zucchini, something most gardeners (not just my daughter) have in abundance at this time of year. This year I thought I’d offer three more recipes to help you use up your bountiful harvest. We may have too many zucchinis, but we can never have too many zucchini recipes! Just click on the links: