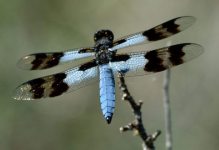 I had never encountered so many dragonflies, both in sheer numbers and incredible variety. Birders speak of “hotspots”—places where birds tend to congregate. Bitter Lake National Wildlife Refuge, just outside of Roswell in southeastern New Mexico, is clearly a dragonfly hotspot. 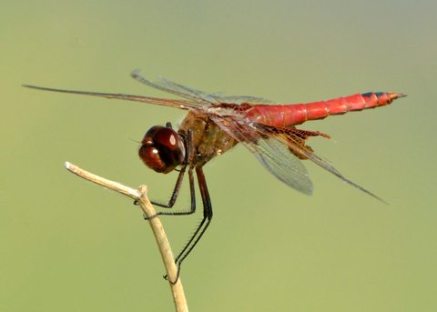 Bitter Lake NWR is famous for its Odonates, even hosting a yearly dragonfly festival in early September. (This year’s festival is planned for September 6.) As their website proudly proclaims,

More than 100 species of dragonflies and damselflies (Odonates) have been documented on Bitter Lake National Wildlife Refuge. The refuge is home to what is considered one of the most diverse populations of odonates in North America.

The refuge was a hotspot in another sense as well. Temperatures hovered around 100° as the sun beat down on the shadeless desert. I’m used to birding in the cool, early morning hours. Looking at dragonflies was a very different experience. 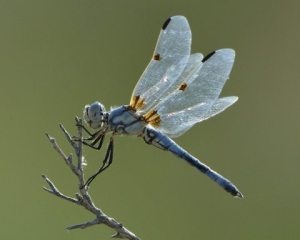 Knowing next to nothing about the various species I was seeing, I focused on taking photos of each color—red, black, green, blue, and an incredible metallic copper—as well as various shapes, sizes, and wing design. Hopefully, that would give me a good start on learning to identify them. I knew they were all Odonates, but even learning to reliably distinguish between dragonflies and damselflies was going to take some work.

Odonates weren’t the only interesting insects. A yet-unidentified but gorgeous emerald-green beetle (?) was trying to dig a hole in the silty soil. I interrupted his efforts long enough to take some pictures. Tarantula Hawks crawled over the flowers along with some flighty butterflies.

Then there were the swarms of nasty biting flies that scorned the triple layer of DEET covering my exposed arms and legs. They left me covered in burning, itching welts. Insects may be fascinating, but there are some I can live without!

Being a wildlife refuge, birds are the main focus at Bitter Lake, and there are plenty of birds to be had—357 species! In winter, the wetlands attract the same Sandhill Cranes and white geese as Bosque del Apache NWR, several hours to the northwest. Arriving in late June, we didn’t see many species, and most of the shorebirds were too distant to identify, even with my spotting scope. At least we enjoyed the Greater Roadrunner (right). 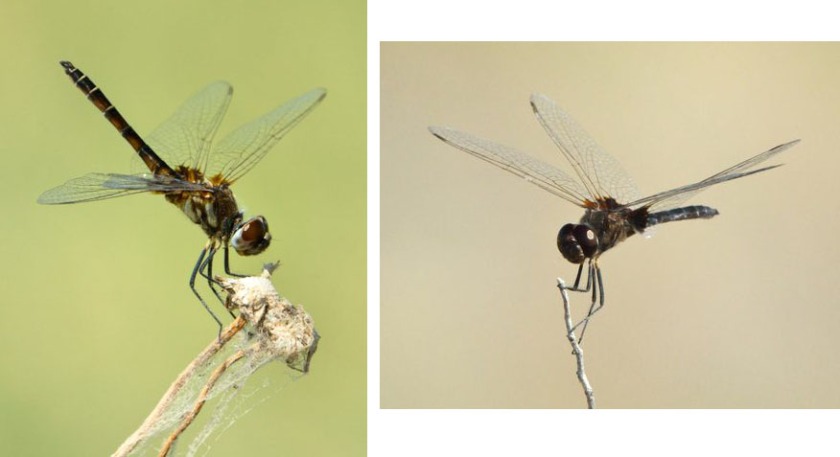 Bitter Lake is also home to 59 species of mammals and more than 50 species of reptiles and amphibians. We almost ran over a slow-moving tortoise at the entrance gate! Colorful wildflowers, like the Silverleaf Nightshade at left, lined many of the roads, even this late in the season. I’m sure many more species bloom earlier, before the weather gets so hot and dry. 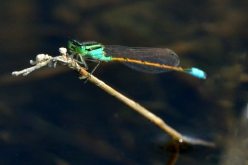 The refuge website has conflicting information about when the visitor center and trails are open, so we made a point to check. The refuge gates are open every day from a half hour before dawn to a half hour after sunset, allowing access to the trails and auto route. The visitor center is only open Monday through Saturday, 8 am to 4 pm. It’s also closed on federal holidays. We arrived on a Sunday, so we weren’t able to browse the nature store inside. The visitor center also houses the bathrooms; the only other options are 4 miles away at the far end of the auto route. 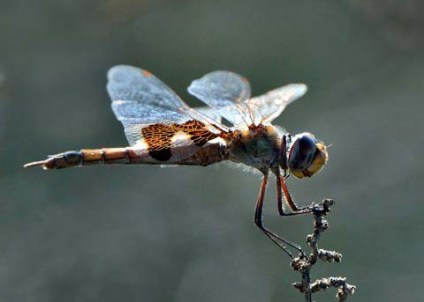 The website clearly wasn’t created by a birder. It also has this very confusing statement:

The refuge’s wetlands provide habitat for … about 20 duck species, including … four species of teal; the cinnamon, American, green and blue-wing, and blue-wing.

You can learn more about Bitter Lake National Wildlife Refuge on their website.

One thought on “Like Dragonflies? Visit Bitter Lake NWR!”