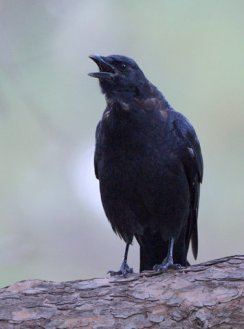 I know a lot of people don’t like crows. There’s something sort of spooky about them. Maybe that’s because they’re black, and black birds seem to encourage superstition. Why else would a flock of crows be called a “murder”? It’s true that they’re not as colorful as most songbirds, and they do make pigs of themselves at feeders, but crows are fascinating. With Halloween fast approaching, this seems an appropriate time to take another look at these very common and highly intelligent birds.

You can learn all about the taxonomy and biology of crows from a variety of websites. I recommend The Cornell Lab of Ornithology, National Geographic, and Audubon for starters. It’s interesting information, but crows are more than a list of facts—much more. They are now considered one of the smartest animals in the world! Want proof?

Take the case of Chatham, Ontario. Situated at the convergence of two major migratory routes, with a river to provide water and warmth and fields full of delicious crops, Chatham is an ideal rest stop for crows. Too ideal—the birds were everywhere, hundreds of thousands of them, noisy, messy, annoying. They ripped open garbage bags, even learning which days of the week the trash was collected in each part of town. If the trash was placed in a solid container, the clever birds simply removed the lids. In an effort to control the population, the townspeople started shooting at them. According to one article,

When hunters fired shotguns at the Chatham crows, … the birds figured out exactly how high to fly to escape the pellet range. When city workers made nightly rounds to disturb them, the crows learned that the workers clocked out at 11 p.m., and simply waited until 11:01 to head into town for the night.

As the residents of Chatham are learning, it’s quite difficult to outsmart a crow!

Crows have been known to change their entire migration pattern to avoid farms where even a single crow has been killed in the past. Generations upon generations later, they still remember specific houses where one measly bird has died. 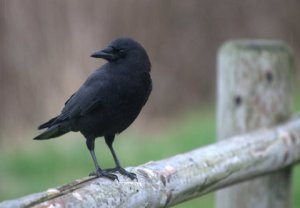 Then there is the study that looked at crows’ ability to recognize human faces. To us humans, all American Crows look pretty much the same. Would they see us as looking more or less identical? It turns out that not only do crows recognize individuals, but they can share that knowledge with other crows, including their offspring! Think about that for a moment. Somehow, the birds that saw the “scary human” in the study were able to communicate what that person looked like in enough detail so that birds who had never seen that particular human before still recognized him (and attacked him). Yikes.

Memory is only one aspect of intelligence. How about problem-solving? It turns out that crows excel at that as well. If you’ve ever read Aesop’s Fables, you might remember the story of the crow that dropped pebbles into a jar of water, raising the level until it was high enough for him to get a drink (left). It turns out that Aesop knew something. Scientists tried re-enacting the scenario, and the crows caught on right away. In fact, they were as good at solving this problem as 5- to 7-year-old children!

Not only can crows use tools, in at least one instance, a crow made a tool:

In a landmark 2002 experiment, investigators watched as a [New Caledonian]crow called Betty spontaneously bent a piece of wire into a hook to snag some food. (It was the first time she’d ever encountered wire, but that wasn’t going to keep her from lunch.)”

This behavior isn’t surprising, given that wild members of this species will “pluck, smooth and bend twigs and grass stems to procure a variety of foodstuffs.” (Wikipedia)

These are just a few examples of how crows are not at all “bird brains.” They’ve been known to place nuts in front of cars, so the weight of the car will crack open the shell (and they wait for the green walk sign before venturing out into traffic). They play tricks on one another. They have a complex social structure, with regional and family dialects and behavior patterns. They’ll unzip backpacks to reach the tasty lunch inside. In short, crows are amazing birds.

I’ll leave you with this video. You may have seen it; it went viral a while ago. It shows a crow sledding down a steep roof on a plastic saucer. It appears that crows are smart enough to know when to just go enjoy life. That’s a lot smarter than many humans!

Bonus word—Self: an individual plant produced by self-fertilization, as opposed to cross-bred.