My husband really loves me. One reason I know this is because we spent Valentine’s Day looking for birds. Since he’s not a birder, this was a special gift indeed… although he did bring a book to read.

One of the advantages of living next to the Rocky Mountains is the presence of a fascinating bird—the American Dipper. This is the only aquatic songbird species in North America, found solely along rushing mountain streams. The birds actually “fly” underwater (think of penguins) in pursuit of the insects and other small animals that make up their diet.

The species ranges from southern Mexico through Alaska, and doesn’t migrate. That means they spend their winters standing on snow and ice, and swimming in frigid water. How they manage in this inhospitable habitat is truly astounding. For one, their chunky, round shape helps them conserve heat. They can slow their metabolism, lowering the body temperature they must maintain. Their blood is filled with extra red cells, allowing them to carry more oxygen. And finally, they have a thick layer of feathers for insulation. Frequent preening keeps the birds warm and dry underneath.

I’ve seen Dippers a number of times before, but I had never quite gotten the photos I wanted. A warm Saturday in the middle of winter seemed like the perfect opportunity to rectify that situation. So, for Valentine’s Day, we headed for Elevenmile Canyon, a US Forest Service fee area ($6.00 per car) off Hwy. 24 in the middle of Colorado. (Don’t confuse it with nearby Elevenmile State Park.)

The canyon road follows the South Platte River upstream to Elevenmile Reservoir, ending at the dam. (You can’t access the reservoir from there.) It offers easy access for fishing (mostly catch and release) and is often filled with people.

The last time I birded the canyon in winter, temperatures were well below zero with an off-the-scale wind chill. This time, highs in the 40s were predicted. We arrived mid-morning, as the sun finally penetrated to the canyon floor.

I knew that Dippers prefer a place with handy rocks from which to plunge into the water rushing by, so Pete drove while I hung my head out the window. We pulled over at the first likely spot and I jumped out with my binoculars. I immediately spotted a little round, charcoal gray bird flitting over the water—Dipper! By the time I got my camera and tripod out of the car and set up on the stream bank, the bird was long gone.

No problem, I thought. I know they’re here. We’ll see another one soon. 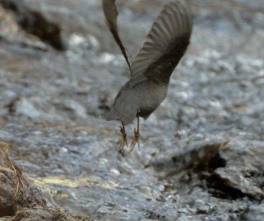 We continued up the canyon. At several points we heard the males’ distinctive, hearty singing. We pulled over each time, but couldn’t spot the bird making all that music. Once, the bird I had been hearing suddenly erupted from under the overhanding ice on the near bank, a spot I couldn’t see from the edge of the road. I had great a great view of his retreating rump—not the photo I had in mind.

As the morning wore on, I became more and more frustrated. We counted half a dozen Mallards, as many Canada Geese, and one Steller’s Jay. Even our dependable Bald Eagle wasn’t home. It seemed that the unseasonably warm weather was allowing the birds to disperse.

Upon reaching the dam, we turned around at the barricade and headed back, still looking for Dippers. We were getting tired and hungry.

Finally, the road crossed over a bridge with just the right amount of whitewater on either side to make perfect Dipper habitat. I asked Pete to pull over so I could thoroughly scout the area. Dippers prefer to nest under bridges where they can’t be seen from above. I figured that if they were anywhere on this river, this would be the spot. 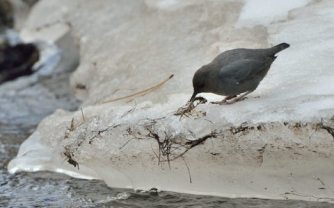 Sure enough—there was a fat little bird sitting on the snow right next to the bridge! I ran back to the car for my camera gear, praying my subject would still be there when I got back.

And not only was that bird still there, but it had a companion! This was clearly a mated pair expecting to nest exactly where I had anticipated. I climbed down closer to the water, hid behind a thick willow with just my lens sticking out, and started taking photos while the birds happily swam, strutted, and pecked at the debris thrown up by the rushing water.

I had initially assumed that American Dippers earned their name from taking a dip in the stream, but I was wrong. Rather, they frequently dip their bodies in a series of rapid deep knee bends. It reminded me of the tail-wagging of the Spotted Sandpiper, but in this case it’s the whole bird, not just the tail.

The birds finally tired of the spot and moved upstream. I headed back to my sweetie, a huge smile on my face. What a great way to spend Valentine’s Day, and we didn’t even need a reservation.

One thought on “In Pursuit of American Dippers”