To refresh your memory, here is the photo from April’s Bird Quiz. The bird was seen in Arizona during the month of April. Don’t read any further if you want one last chance to identify this bird.

Cactus Wrens, Cardinals, a Phainopepla or two—Arizona has such interesting birds. I’ve made enough trips that some of the species are becoming familiar old friends. But then there are the birds that make desert birding such a challenge. They’re small, they’re gray, and they’re hard to tell apart. Just as most of the country has LBJs—Little Brown Jobs, Arizona and other desert states specialize in LGBs—Gray Birds. And this bird is one of those.

There aren’t a lot of field marks to go on. We can see gray—darker on top, lighter on the undersides. The beak is somewhat cylindrical—not wedge-shaped, not sharply pointed. Legs and feet are dark. Eye is black, but we can’t see it well enough to tell if there’s a ring around it or not. I didn’t provide a very useful photo, did I? Well, sometimes you just have to flip through the field guide, page by page.

Flip straight to the Passerine section of the field guide, as this is clearly a perching songbird. Now we page through the options. The back of the head is too rounded for a flycatcher, although the Northern Beardless Tyrannulet (a bird smaller than its name) gives us pause. It’s clearly not a shrike, but what about a vireo? Let’s put a bookmark in that section and move on. Skipping along, the next small gray birds are easy to eliminate. There’s no crest, so not a titmouse, and the Verdin, though mostly gray, has a bright yellow head.

Next up is the Bushtit. Hmmm. Could be, but the shape isn’t quite right. Bushtits have virtually no neck. Also, their bill is incredibly short. Nope, not that.

We can eliminate the Painted Bunting, sparrows, and finches, with their broad, triangular beaks. And we’re at the end of the book. Let’s return to that bookmark in the Vireo section.

There are three vireos that make good candidates: Bell’s, Gray, and Warbling. How to tell them apart? If we could see the face better, we could look for an eyebrow (Warbling), a faint eye-line and “spectacles” (Bell’s) or a distinctive, complete eye-ring and pale lores (Gray). If we could see the wing better, we could note if a wing-bar is prominent, faint, or absent. However, we can’t really see much detail, with the way the bird is posed.

Let’s squint and pretend—there is a faint suggestion of a wing bar, and no strikingly obvious eyebrow. That eliminates Warbling Vireo.

At this point, there’s really no way to tell if it’s a Bell’s or a Gray Vireo. Sometimes, that’s as good as it gets. However, I can cheat, because I was there. I have more photos! 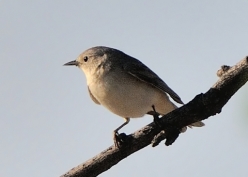 Does this help? You can click on any photo for an enlarged view.

The eye-ring is faint, but it’s there. Remember, this is April, and the bird is worn, so markings aren’t as crisp as when the feathers are fresh and new.

The pale lores aren’t visible in the first photo, but they show up in the other two. (This is why it helps to go by more than one field mark!)