With my recent weekend in the mountains still fresh in my mind, I was eager to return to the San Luis Valley, in south-central Colorado, to look for more birds. The conference field trips had been crowded, and I figured that ditching the entourage should help me get closer views, and hopefully photographs, of the birds we’d seen the previous weekend. And it just so happened that Pete and I had scheduled a date day. How convenient.

We had great intentions of starting before dawn, but a late evening the night before meant that we didn’t leave home until almost six. Still, that’s pretty early—unless you’re planning to drive for several hours. We finally arrived at our first destination, Alamosa National Wildlife Refuge (NWR), around nine.

Spring’s abundant moisture meant that the ponds along the entrance road were full of water. I remembered seeing dozens of Wilson’s Phalaropes there several years before, and I hoped to see them again, but the wetlands were clogged with thick cattails. There could have been two hundred phalaropes in there, but we weren’t going to see them.

We took a short break at the visitor center, closed on the weekend. Happily, they don’t lock the porta-potties! Cliff Swallows were nesting under the eaves of the buildings, and I tried for some shots of birds on the wing. While the adults were busy going in and out of their nests, we didn’t see any indication that eggs had hatched yet.

Driving the auto route was somewhat more productive. The ditches along the road were full of water, with pairs of Cinnamon Teals paddling up and down the waterways. Brown-headed cowbirds perched on the bushes. Red-winged and Yellow-headed Blackbirds were abundant, the males singing from the tops of the cattails while the females attended to their nests secreted deep in the foliage. From the strident noise they were making, Marsh Wrens were obviously plentiful as well, but we only caught glimpses of a few. The rest were skulking among the leaves, along with some Common Yellowthroats that ignored my polite request to pose.

As we circled the loop, a dozen or so White-faced Ibis (top) caught my attention, and I held the shutter down as they fed, then flew. 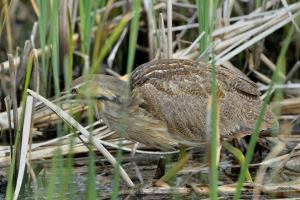 I was getting tired of holding my heavy lens out the window, and was about to put the camera away, when I spied a Killdeer across the ditch. As I squeezed off a few pictures, I suddenly realized that the reeds next to the plover weren’t reeds—it was an American Bittern! Frustratingly, the bird was too close for my long lens, and I struggled to remove the tele-extender before the bird flew.

After the adrenalin of the bittern, it was time to move on down the road to our next stop, Monte Vista NWR. With similar habitat, I expected similar birds, which is what we found. Monte Vista is best known for the Sandhill Cranes that pass through each spring and fall; they’re celebrated every March with a Crane Festival. Now June, the cranes were long gone, and the refuge was home to more blackbirds, ibis, wrens, Common Yellowthroats, and Yellow Warblers.

The highlight at Monte Vista was the baby coots. American Coots don’t rate very highly as photogenic birds. They’re black and white, not colorful, and while it’s easy to get close, they’re so common that there’s not much point. Their young, however, are a different story. Their fluffy heads and over-sized beaks are neon orange, and they manage to look both ugly and adorable at the same time. I happily photographed the parents feeding their offspring, the perfect image of parental care and affection.

As the sun hit its zenith and the birds settled down for their midday naps, we headed off to lunch in town. Big, black clouds were threatening rain as we emerged from the restaurant, and the afternoon thunderstorm shadowed us all the way home.