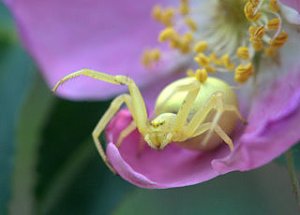 If you’ve read my blog for very long, you might have gathered that I’m not exactly wild about spiders.

Realizing that this is a significant flaw in someone who loves nature and gardening, and who spends a lot of time outdoors, I’ve been attempting to overcome my aversion. I am making an effort to educate myself about arachnids. I photograph spiders wherever I see them. I’ve even held “Rosie,” the Chilean Rose Hair Tarantula at the Butterfly Pavilion in Broomfield (see proof). 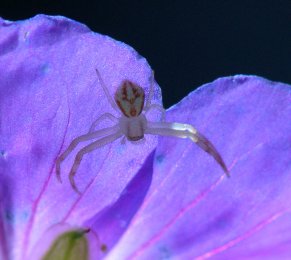 The family Thomisidae has many members and I still consider some of them the epitome of scariness. However, the flower crab spiders, in the genus Misumena, are a lot less intimidating. They’re almost cute, with their plump, round bodies and outsized front two pairs of legs. These they keep spread wide open, ready to “hug” an unsuspecting insect.

Movement is accomplished with the remaining two pairs of legs. They scuttle back and forth or sideways, much in the same way a crab moves (although crabs have ten legs, not eight), hence their name.

With excellent camouflage, they’re surprisingly hard to see. In fact, some species, such as the Goldenrod Crab Spider (left), are able to gradually change their color from white to yellow or back again, in order to perfectly match their floral lair! That’s all to the spiders’ advantage, as they are ambush predators. Crab spiders don’t make webs or wrap their prey in silk. Rather, they do their best to look like part of the flower they’re crouching on. When an unsuspecting insect wanders into range, they spy the movement with their eight eyes. Then—bam, it’s suddenly lunchtime!

While their fangs are small, their venom is quite potent and a quick bite rapidly immobilizes their prey. (Happily, we humans aren’t affected by the venom, so there’s nothing to worry about.) The spider then proceeds to suck out their victim’s juices.

I was particularly impressed by the size of the prey these spiders are willing to tackle. Consider this photo of a crab spider eating a damselfly much larger than it is! (It seems the damselfly was also mid-lunch when it was so rudely interrupted.) 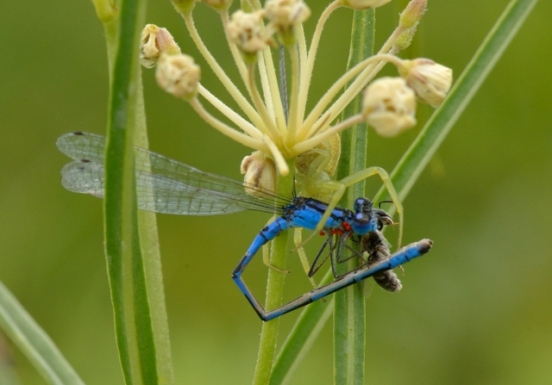 Female crab spiders are often much larger than the males, and more colorful as well. They’re devoted mothers. To ensure the safety of their offspring, they carry their egg case with them until the little spiders hatch. There are multiple generations per year. As fall arrives and temperatures plummet, the adult spiders slow down, finally freezing to death. The last egg cases overwinter, hatching when the weather warms in the spring.

Crab spiders aren’t fussy about which insects they eat. Flies, bees, even butterflies are fair game. While they do eat some “good” bugs, they eat many more pests. I can certainly appreciate any creature that dines on flies and mosquitoes!

Maybe I still shudder at the fat, brown house spiders, and call for help at the sight of a black widow. At least now I know there are spiders I can enjoy. It’s a start.