Worth growing for its delicious ­­­­­­fra­grance­ alone, dame’s rocket also offers showy, long-lasting flowers and is as trouble-free an herb as you could ask for. Its multitude of common names attests to centuries of cultivation in gardens and to the high regard in which it has been held. (Mother Earth Living) 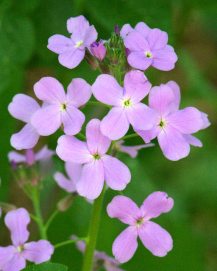 How can you resist such a glowing recommendation? It’s true that dame’s rocket is all these things, but it is also an invasive outlaw, wanted dead, not alive. Like any most-wanted suspect, Hesperis matronalis hides under a plethora of aliases: damask violet, dame’s-violet, dames-wort, dame’s gilliflower, night-scented gilliflower, queen’s gilliflower, rogue’s gilliflower, summer lilac, sweet rocket, mother-of-the-evening, vesper flower and winter gilliflower, to name a few. But not matter what you call it, it’s against the law to grow this plant in Colorado.*

Dame’s rocket didn’t go bad until it arrived in North America. It started as a pretty wildflower of Asia and the Mediterranean regions. Its comely good looks and ease of cultivation brought it into gardens across Europe. There, it escaped cultivation, giving the first indications of its future life of crime.

Settlers to the New World brought their favorite flowers, dame’s rocket among them. Not content to know its place, it again escaped confinement, and you can now find it growing wild along roadsides, in ditches, and in damp woodlands on both sides of the ocean. 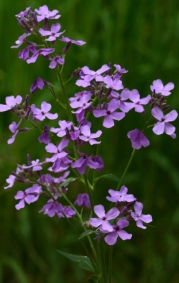 Identification is easy. The plants are in the mustard family, and bear a close resemblance to their relatives. As biennials, a rosette of leaves appears the first year, and plants elongate and bloom the second. White, pink, or purple flowers have four petals, and perch in clusters atop long stems lined with long, alternate leaves with toothed margins. These eventually turn into long, narrow cylindrical pods filled with seeds. Planted en masse, it’s easy to see why the flowers are so popular—they lend an air of country innocence to a meadow or cottage garden.

Still, the evidence remains. The plants are escape artists.

Dame’s rocket blooms from late spring to late summer, and continually produces seeds, even while still in bloom. As a result, seed production is prodigious. To make matters worse, the plant is sneaky, and has wormed its way into many wildflower seed mixes.

Happily, the only way the plants spread is by seed, so control is directed at destroying plants before they bloom. They may by killed by hand-pulling or through the use of herbicides. Even though the plants die after blooming, seeds can stay viable in the soil for years, so continued effort is necessary.

Its love of moisture means that dame’s rocket is more of a problem in the mountains than here along the dry Front Range, so I was surprised to see it flourishing in the garden of one of the county’s nature centers! Still, if you water it, it will grow. Be sure to check seed mixes before planting wildflowers, and keep this beautiful but ambitious flower out of your garden!
_____
*Connecticut, Massachusetts, and Wisconsin have also banned dame’s rocket.