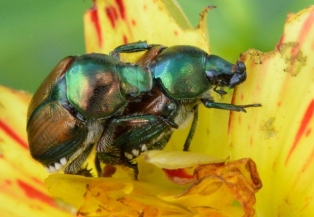 It’s the end of the summer, and what’s a nature photographer to do? Most flowers are languishing in the sultry heat, their leaves brown and crispy as the summer monsoon turns to dry autumn. Gardens look battered from a season of hail storms, insects, and the ravages of sun and wind. The birds have had their families, so the males no longer need to impress the ladies, at least for a while. In many cases, they’ve shed their fancy duds in favor of muted colors that predators won’t notice. This year’s crop of youngsters is also hoping to be overlooked, with tan stripes that blend with the fading grass. Some of the most photogenic birds—tanagers and warblers, for instance, are already wending their way southward.

As I learned on Monday, however, this is a great time of year for bugs. I spent the last day of August hanging out at Hudson Gardens, in Littleton. I admit that I was a bit disappointed—the gardens were looking pretty ragged. Some beds weren’t planted at all, and the expanses of gray-brown dirt detracted from the appearance of the gardens. Many large shrubs and small trees were dejectedly wilting, and leaves fell from the cottonwoods with every gust of wind.

However, these issues were minor compared to the legions of insects munching on everything in sight. Hordes of Japanese Beetles feasted on many of the late blooming flowers. The dahlias suffered the worst—the beetles seemed particularly attracted to the yellow ones—but few plants were immune, as this beetle-in-a-rose illustrates. 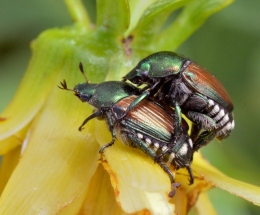 Considering that a few years ago Colorado didn’t even have Japanese beetles, I was stunned at how fast they have become a major pest. Then I realized that not all the beetles were eating—and when I noticed what they were doing, their exploding population made more sense!

The Japanese beetles weren’t the only ones trying to produce one more generation before winter. Aptly named Black Blister Beetles (Epicauta pennsylvanica) were paired off on the goldenrod, with the males chasing (and catching) the females all around the flowers. 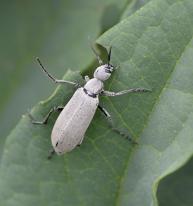 Blister beetles aren’t always considered troublesome, but I caught another Epicauta species, (these were gray, as shown at left, but I wasn’t able to ID their species) right in the act of hungrily devouring leaves.

They were joined by Spotted Cucumber Beetles (below, right) and another skeletonizing leaf beetle, Trirhabda sp. As I approached the plants where they were feeding, they decided I was too close for comfort and flew from shrub to shrub like a flock of Bushtits. 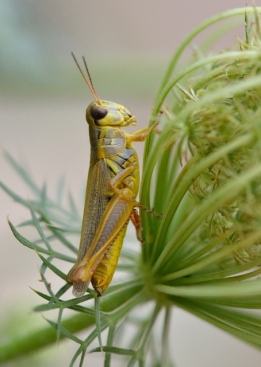 Of course, there were plenty of grasshoppers, but that’s to be expected. They thrive here in Colorado. One section of the gardens is devoted to a natural prairie, the tall grass mixed with Queen Anne’s Lace, Rudbeckia, and other native wildflowers. As I walked down the path, the grasshoppers hastily jumping out of my way created quite the racket.

Not all the bugs were bad guys. Hives located on the premises explained the abundance of honeybees. Other bees, wasps, and flower flies also hovered over the flowers. 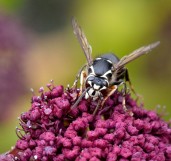 The Queen Anne’s Lace, Joe Pye Weed, and various kinds of goldenrod were some of the favorite bee flowers. I didn’t see many butterflies. That may be due to the large numbers of European Paper Wasps and Bald-faced Hornets. The wasps are aggressive predators, feeding on soft-bodied insects such as caterpillars. Too bad they don’t eat Japanese Beetles! 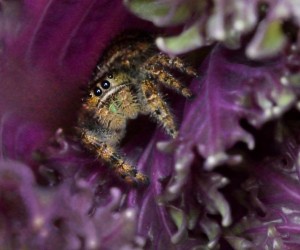 Even though it is getting pretty late in the season, I’d hoped to see more flowers—intact ones, that is. But I spent an enjoyable afternoon photographing some fascinating insects—and this adorable little spider (I’m sure he was trying to look ferocious!) that I found hiding in a purple ornamental cabbage (left)—so from my perspective, the day was a success.

2 thoughts on “Yet More Bugs…”