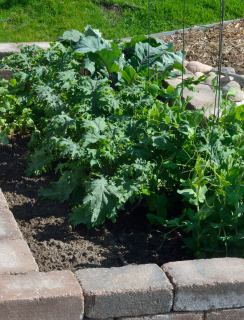 I didn’t plant this year’s veggie garden until mid-August. No, I wasn’t procrastinating. I just had to wait for the new boxes to be built, filled with topsoil and compost, and the drip lines put into place. While we moved to our new house in May, the landscaper didn’t start until the end of July—and my veggie boxes turned out to be the last thing they did.

Now I have two 4-foot wide raised planters, each about 10 feet long. (My garden got downsized along with the rest of my life.) I love the “rumble stone” bricks we used—they’re comfy to sit on as I weed and harvest. The boxes are a little over two feet tall (they’re on a slope, so it varies) and we filled them to about 10 inches from the top. I wanted some headroom for adding future amendments and so I can lay clear panels over the edges to create coldframes as needed.

Since it was so late in the growing season (at our 7,100 foot elevation, my average first frost is in late September), I didn’t see the point of buying new seeds. Rather, I dug through my shoebox of old seeds to find what might still have time to produce a crop. It turned out that all the seeds were at least three years old. I really don’t recommend planting old seeds without first doing a germination test, but since I had nothing to lose, I figured that even a few plants would be better than nothing. I ended up planting leaf lettuce, baby bok choy, sugar-snap peas, Red Russian kale, and a lot of radishes. My dad loved radishes, and I always grew him some. We aren’t quite as fond of them, but hey, at least they’re fast! A local garden center had given me a free six-pack of aging kohlrabi starts, so those went in as well. All of these are cool weather crops that can handle light frost. Kale, in particular, tastes better after the first frost—sweeter and less bitter. Still, with our short growing season, I figured that I was probably wasting my time.

As you can see, I was wrong.

We started picking radishes three weeks later. Three weeks! Those were the little round cherry ones. White icicles followed, some 9 inches long! The little red balls we hadn’t harvested yet kept growing and growing until they looked like turnips, but they were still tender and tasty. It was incredible. Yes, some bolted, and I pulled those out and tossed them aside to start a new compost pile, but even so we had more radishes than we could possibly eat. The crisper is still stuffed; anyone like radishes? 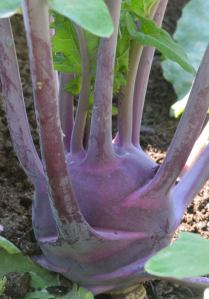 While we were still working on the radishes, the kohlrabi reached harvestable size. These enlarged stems may look like satellites, but their mild cabbage flavor is delicious. I like them raw, shredded into salads or coleslaw, and even better cooked with salt and butter, or even covered in white sauce (they’re the only veggie I like with a white sauce).

We went away for a week, came back, and discovered that we now have plenty of Simpson Elite and Prizehead lettuce (above), armfuls of kale (top), and nine cute little bok choy plants ready to cut. Chinese stir-fry is on tomorrow’s dinner menu, followed by what we like to call Christmas soup—sausage, tortellini, kale, onions, and tomatoes in broth.

The only crop we’re still waiting on is the peas. I used an early, dwarf vine variety, and they are just starting to bloom. Still, as long as our lovely fall weather persists, I have hope. The vines are much healthier than the ones I used to grow in spring, so I may treat them as a fall crop from now on.

I always intend to plant a fall garden, but it’s usually so hot and dry in July, and I’m so busy with the spring and summer crops, that I rarely get around it. Now that I see how well it works, however, I’m going to make an extra effort in the future. With a much smaller garden, planting in mid-summer shouldn’t feel so overwhelming.