We have a lot of snow in our front yard. It may not seem like much to those who live in Minnesota, upstate New York, or Maine, but for us here along the Front Range of the Rockies, it’s a lot of snow. Colorado is dry. Colorado is sunny. We don’t get all that much snow, and what we do get melts the next day. The “real” snow is supposed to stay up on the ski slopes, not in our front yards.

When we picked out a lot for our new house, we were thinking about a longer growing season from our south-facing backyard, the spectacular view of Pikes Peak out the living room picture windows, the warmth of sunshine filling our bedroom. We carefully oriented our house to take advantage of all these.

Then fall arrived. With it came a surprising amount of snow, at least for here. But more importantly, that snow was delivered by a hurricane—or at least that’s what it seemed like. The wind howled. The snow didn’t fall, it zoomed past the window, sideways. And that’s when we realized what we had overlooked. Our street runs parallel to the prevailing winds. That means that when it snows, the wind blows the snow straight up our little road. At the end, it bounces off a low hill, swirls around in an impressive flurry, and dumps—right in our yard. The houses at the other end of the street had about three inches. The house across from us had bare ground. And we had drifts five feet high!

After 22 years in Colorado, we’re now the proud owners of our first snow-thrower. Oh joy.

But remember, I’m a gardener. Once we again had access the road via our driveway, I turned my attention to our just-planted landscape. We had a yard full of tiny, infant plants, and I couldn’t see a single one. Were they all right?

I was confident that the deciduous shrubs would be fine. They were obviously dormant, and being buried under several feet of snow would protect them from winter injury. But what about the evergreens? Dwarf spruces are not cheap. Then there were all the broad-leafed evergreens, chosen for their year-round leaves and pretty berries—Oregon grape holly (Mahonia), Cotoneaster, Manzanita, and bearberry (kinnikinnick, Arctostaphylos uva-ursi). Would they die from lack of sunlight? Or would their still-green foliage appreciate some shelter from the blowing winds?

Concerned about my leafy babies, I turned to the experts. Apparently, all this snow is a Very Good Thing. What a relief!

For starters, the plants buried in snow should be safe from gnawing bunnies (we must have dozens!), voles, and other animals, as well as clumsy humans wielding snow shovels. I’m more concerned that the exposed plants in the backyard will be turned into rabbit pellets by the time the weather warms.

Also, snow is cold, but not as cold as the air. We’ve had plenty of nights in the single digits, but the snow, full of air as it is, provides excellent insulation. My plants are swathed in a 32° blanket. In addition, the ground will also stay at a mere 32°–well within the hardiness limits of my zone 4 and 5 plants. In fact, maybe I can try some zone 6 species!

Sunshine reflected from white snow, or through ice, can burn tender tissues, or cause them to dessicate and die. It is better for the plants to be safely below the snow cover.

Even better, the snow protects from our drying winds. As I mentioned earlier, we get a lot of wind here. Gusts over 40 mph are common. Add in our low humidity, and the hurried air can suck the moisture right out of a vulnerable leaf. What’s more, with the ground frozen, the roots can’t replace that moisture. This is the main reason that broad-leafed evergreens are as rare here as a flamingo in Fairbanks. 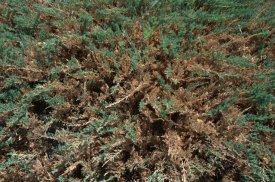 (Let us pause for a rant about junipers. The rarity of very hardy, broad-leafed evergreen shrubs explains why  junipers are so popular in cold climates. But they can be damaged by dry wind just as much as other plants, as you see here. Also, as I’ve mentioned in the past, Pete and I are both highly allergic to junipers, plus I just don’t like them. No junipers for us!)

There are a couple of plants near the front door that have emerged from their snow cover, and I can see that they’re less than pleased to be exposed so cruelly. The Oregon grape holly (above, left) is faring the worst. See how desiccated the leaves are? The adjacent cotoneaster (right) looks much healthier, but it has smaller, thicker leaves better suited to dryness. They’re both native to the Rockies, so I’m optimistic.

Winter has just gotten started, and I won’t know the fate of my garden until spring—which should be here by June. By that time, I’ll just need to worry about hail.