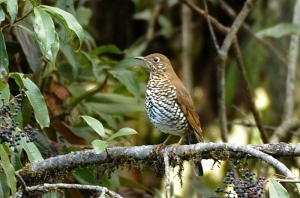 We interrupt this blog for an exciting, bird-related announcement. It seems incredible that an animal as large as a thrush could go unnoticed until now, but scientists have recently discovered a new species of thrush! It was separated from, and is similar to, the Plain-backed Thrush, shown here courtesy of Wikipedia.

The bird lives in the Himalayas of northeast India and the adjacent parts of China. As I haven’t been traveling to that part of the world lately (I haven’t even been out of the country in far too long!), I’m posting some links to a couple of the better articles I found on the discovery.

Conservation India has an very informative article. (To put this discovery into context, this article mentions that, “Since 2000, an average of five new species per year have been discovered globally, most of which are from South America.”  I had no idea!)

This article by Fox News includes the song, which is very pretty.