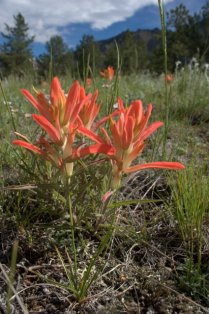 The scarlet blossoms really do look like bushy paintbrushes dipped in red paint; they’re hard to miss, even in a meadow crowded with wildflowers. Most of us easily identify these iconic perennials, although we may be a bit confused by the species that bloom in pink, white, and yellow.

Here along the Front Range of Colorado, the most common species of paintbrush is Castilleja miniata, more familiarly known as Giant Red Paintbrush. The one- to two-foot plant is easily identified by its long, unbranched stems lined with lance-shaped leaves. They’re topped with colorful bracts, which are usually divided into threes. These bracts are typically red (miniata means “colored red”) but you can also find blooms in shades of orange, salmon, and pink. The actual flowers are yellowish-green tubes that grow to become more visible later in the season. 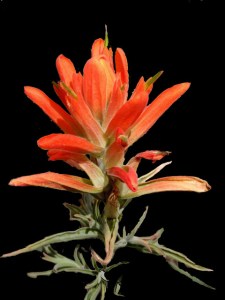 C. miniata is one of the most widely distributed paintbrushes, and can be found in early to mid-summer west of the plains from Alaska to Mexico. It’s hardy in USDA zones 4 through 8. Although it prefers the damp, well-drained soil and full sun of mountain meadows, I’ve seen it blooming east of town on the short-grass prairie. You can also find plants in open woods, dry meadows, thickets, grassy slopes, clearings, and roadsides.

Because Indian Paintbrush is one of the most popular wildflowers, many people would love to grow it in their own yards. Until now, that has been extremely difficult. It’s not that the plant is picky, it’s because paintbrush is almost impossible to transplant.

It may look innocent, but paintbrush is a parasite. Its grows special roots that penetrate the roots of a nearby host. At this point, the paintbrush becomes somewhat of a free-loader. The host plant acts as an additional source of water (useful in arid soils) and perhaps of sugars and other nutrients as well. It’s important to the paintbrush that the host plant survive. While its seed contains enough energy to get started, the paintbrush will decline and die if it can’t make this vital connection in time. It also declines and dies if this link is broken.

This means that if we wish to transplant a paintbrush, we need to include the other plant with it. Typically, the host plant is a grass, although wildflowers in the sunflower and pea families are also common. In a field full of grasses, weeds, and wildflowers, identifying which plants to dig isn’t easy.

There are two ways around this. One is to start from seed. Starting seed directly in the garden requires optimal conditions. Nature has been doing this for millennia, with obvious success, so it’s best to follow that example. Sow the seed in early fall, when they normally ripen. A cold treatment improves germination. Sow the host plant at the same time. Blue gramma grass is one recommended host.

The other option is to start or purchase transplants. Several nurseries now sell paintbrush plants in pots that also contain a grass plant. Keeping the soil ball intact ensures that the roots stay connected. 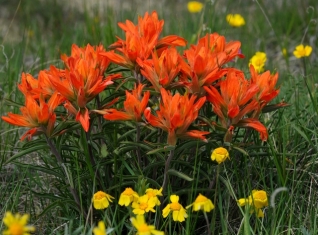 To start paintbrush in a container, first stratify your seeds for three months (see “Giving Your Seeds the Cold Shoulder”). Then, according to one expert, sow shallowly in individual containers. Keep at 69-77° F during the day and 50-60° F at night* until the seeds germinate. Four to six weeks after they sprout, the plants should have four to six sets of true leaves. At this point, move them into the same container as their host plant seedlings. The combined transplants are ready to set out at about 16 weeks.

All this sounds like a lot of work, but paintbrush could make a delightful addition to a native garden. Hummingbirds love the flowers, and while a hungry deer or rabbit will eat just about anything, paintbrush is not on their preferred list.
_____