To refresh your memory, here is the photo from June’s Bird Quiz. The bird was seen in New Mexico during the month of June. Don’t read any further if you want one last chance to identify this bird. 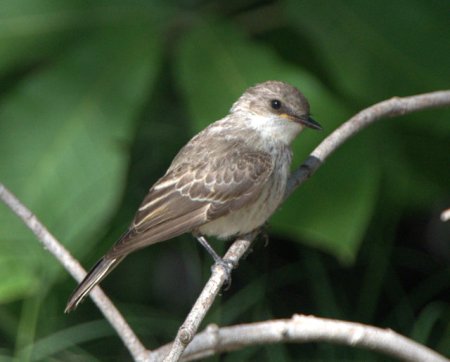 Before I was a birder, I had the vague notion that each bird species not only had a unique appearance, but it had only one. In other words, all Mallards had green heads, all House Finches were beige and red, and all Western Gulls were white with black tips.

When I began to get interested in birds, I quickly realized that very often, the females looked quite different from the males. Not all Mallards had green heads—female Mallards are brown! That meant I had a whole new set of birds to learn to recognize. Oi!

Then I discovered that young birds might look different from the parents. Even worse, I discovered gulls, and the multiple molts they go through on their journey to maturity.

North American birders don’t just have 750 or so birds to learn. It’s more like 2,000! (Don’t quote me; that’s a rough estimate.) And I haven’t even addressed the birds that look identical (at least to me), yet are different species. What do you mean, I have to learn their songs?

So here we are in June. June, July, and August can be tricky months to ID birds. Yes, the adults are in their breeding plumage, which is very helpful, but there are all these immature birds to contend with. They sure can clutter up the landscape!

With this as an introduction, you might now have the idea that the bird in this month’s quiz isn’t an adult male—or even an adult at all! Hmmm….

So where do we begin? It always helps to narrow things down to a single family, if possible. You don’t find your grebe listed under the ducks. You won’t find a female House Finch in with the sparrows. So which family are we dealing with?

There are some clues. For one, this is clearly a small, perching songbird—a Passerine—so we’re in the back half of the field guide. Not only that, but we can narrow things further. It’s clearly not a swallow, or a jay, or a thrasher, for instance.

The beak is narrow and pointy—an insect-nabbing kind of beak—so we can eliminate seed-eating specialists such as sparrows and finches.

There’s one more detail that you don’t want to miss, but you’ll have to look closely. See those bristles around the beak? I’ve enlarged the photo here for you.

Bristles like that are a common feature of one particular family of birds—the Tyrant Flycatchers. (You can see them on goatsuckers as well, but this is definitely not a nighthawk or poorwill.) Even though a “small bird with a pointy beak” can apply to vireos and warblers, among others, a “small bird with a pointy beak and bristles” sends us immediately to the flycatchers.

Of course, in the field, you wouldn’t necessarily be able to see this level of detail. On the other hand, you would notice that the bird would sally out for a flying insect, then return to its original perch—over and over. This is another good indication that you’re seeing a flycatcher.

You’ll find the Tyrant Flycatchers at the beginning of the passerines, a hair past the middle of your field guide. Included in this family are the phoebes, wood-pewees, Empidonax flycatchers (“Empids”), and kingbirds.

Probably the easiest next step is to take a good look at the photo. Note the lack of eye-ring, the two-tone color scheme (brown and white—how boring!), the lack of wing bars. Remember it’s a small bird. Now flip through the pages of your book until something looks similar. Remember to check out the males, females, and immature birds! (The streaked/speckled breast sometimes indicates a juvenile bird.)

What did you find? There’s only one possibility that matches every field mark I mentioned above. Yes, it’s a juvenile Vermilion Flycatcher. To compare, here’s a picture of the male. Would you have guessed that they’re the same species?