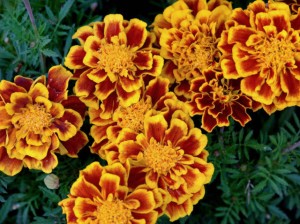 It sounds too good to be true. Not only are marigolds pretty, but growing in your vegetable garden will protect your harvest from nematodes, beetles, hornworms, whiteflies, squash bugs, thrips, hornworms, and even rabbits. I know it must be so, because I read it on the internet:

Gee, if it’s that easy, why not? Marigolds are easy to start from seed, grow quickly, thrive almost anywhere, and produce tons of sunny yellow and orange blooms all summer long.

Unfortunately, like any other too-good-to-be-true advice, the wise gardener will add a generous dollop of skepticism. Yes, marigolds are pretty. But do they belong in a vegetable garden?

Probably not. While there is ample research to support the claim that marigolds suppress some harmful types of nematodes (along with some other “disease-causing agents”), they don’t come close to being the cure-all we’d like them to be.

First of all, just what is a nematode? It’s a fascinating type of unsegmented worm also known as a roundworm. According to Wikipedia, there are thousands of species and they’re found all over the earth, accounting for about 80% of all living individuals!

Several species are significant parasites in humans and other mammals, such as filarias, hookworms, pinworms, heartworms, and the worms that cause trichinosis. Others are microscopic species that live in the soil and are parasitic on plant roots, such as this root-knot nematode. A significant problem in warmer, moister states, these bad guys aren’t found in Colorado.

Most soil-dwelling nematodes are not harmful. They’re just part of the soil’s microfauna, minding their own business. And finally, some are actually beneficial, preying on garden pests such as cutworms. Do we want to discourage those species?

If you live where parasitic nematodes are a problem, you should know that not all marigold species can help. Stick with African (T. erecta) and French (T. patula) marigolds. Those are the ones that produce the anti-nematode chemical. alpha-terthienyl. And sticking a few plants here and there won’t do the trick. They must be densely planted as a cover crop and left to grow for a season, then tilled under. Repeated plantings increase their effectiveness, as the effect is cumulative. (It’s not just marigolds—other plants such as India Mustard, Brassica juncea, have a similar effect.)

What about all those other claims? Anecdotal evidence is untrustworthy, and there are no scientific studies to date showing that marigolds protect crops from those pests. In fact, if you would like to make a significant contribution to the gardening world, set up a carefully controlled study and test it yourself!

But marigolds are pretty—why not plant them anyway? We may not be certain that they’ll help, but what harm can they do? Actually, plenty. Marigolds planted in with the veggies compete for water and nutrients, just like any other weed. Even worse, spider mites love marigolds. That’s the last pest you want to attract to your veggie patch!

So sure, grow some marigolds. They brighten flower beds and look terrific in containers and bouquets. Some are short—a foot tall of less—while others reach past our knees. Styles vary as well; there’s a marigold just right for every situation. Just don’t expect them to solve your pest problems too.
_____

References for bulleted quotes at top (in order):