To refresh your memory, here is the photo from July’s Bird Quiz. The bird was seen in Colorado during the month of July. Don’t read any further if you want one last chance to identify this bird.

Where to begin? We have a fairly large brown songbird with a bit of patterning on its undersides. The throat is white, the eyes and legs are dark. Probably the most prominent field mark is the large, sturdy beak.  That might not seem like much to go on, but consider that we’ve already eliminated most types of birds—waterfowl, shorebirds, wrens, woodpeckers, owls, flycatchers, raptors, hummingbirds, warblers… it’s actually a long list.

So which passerine songbirds—those in the back half of the field guide—have substantial beaks like this one? Grosbeaks (found in various families, an example of convergent evolution), crows and jays, starlings, cardinals, Icterids (which include orioles, blackbirds, cowbirds, and grackles), perhaps some tanagers.

We can easily eliminate the brightly colored grosbeaks, cardinals, orioles, and tanagers. Even the immature ones and females are never this boring. Likewise, crows and ravens are black, not brown. And the jays found in Colorado are blue or gray, or a combination of those. (Brown Jays come to southern Texas, and rarities happen, but a quick comparison shows that this is nothing like a Brown Jay.) That leaves us with starlings, and the family of blackbirds, cowbirds, and grackles, a manageable list of possibilities.

Let’s look at starlings first. The European Starling in mid-summer is black with a kind of iridescent sheen, quite pretty, really, although their invasive habits make them unwelcome no matter how showy their feathers. However, juvenile starlings are a drab gray-brown color with a pale throat. Is this a starling?

But wait, go back to that beak. Note how the upper mandible (the culmen) forms a continuous line with the top of the bird’s head.  Starlings have a straight, pointed bill, not a thick one like this, and it’s at an angle to the bird’s face.

Besides, juvenile starlings lack the patterned chest of this bird. It’s not a starling. We’re back to the Icterids.

Again, let’s keep that beak in mind. Blackbirds have smaller, pointy beaks. Grackles have thick beaks, but they’re quite long and still pointed. This bird has a wedge-shaped beak. We’ve just easily narrowed our options to the two western cowbirds. That wasn’t so hard, was it?

While Bronzed Cowbirds don’t normally hang out in Colorado, they have been sighted in the state. Brown-headed Cowbirds are quite common. So either is a possibility. The females of both species are brown, with paler undersides and a bit of streaking. Both have stout bills, although that on the Bronzed is a bit arched on top, while that of the Brown-headed is straighter. Still, it’s a minuscule difference and hard to see, especially in the field.

What else can we see? How about the overall color? The Brown-headed Cowbird is a bit lighter, and a bit smaller. Hmmm. That’s not so obvious either. However—there are two distinctive field marks that distinguish the females of these two species. One is the throat color. The only bird with a pale throat is the Brown-headed Cowbird. And the other is eye color. If you can get close enough to see the eye, you can be confident in your ID. Bronzed Cowbirds have red eyes! Pretty scary, actually. Our bird has a black eye. It’s a Brown-headed Cowbird.

Here are photos of a Bronzed Cowbird (left) and another Brown-headed Cowbird, for comparison. Seen in the field, it’s easier to tell them apart. The Bronzed Cowbird seems more angular, with a stronger jaw. 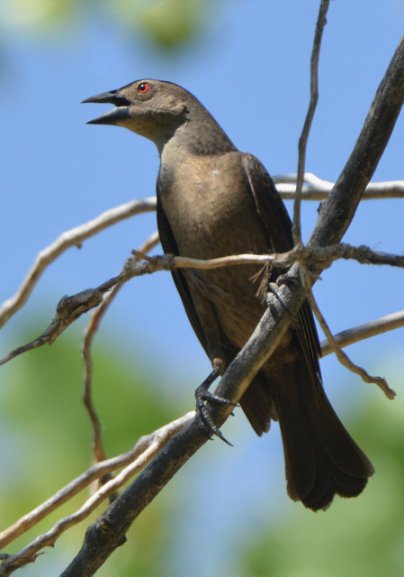