You can’t go to Australia and skip the beach. It would be unthinkable! That’s why, after spending a wonderful week in the Blue Mountains, we decided to drive north along the coast to Brisbane. Determined to allow plenty of time for birds and beach stops, we allocated three whole days. We could easily have spent a lot longer. 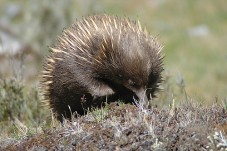 Because the coastline is all inlets and spits of land, it was difficult to hug the water. Between towns and glimpses of the ocean, the highway ran through numerous national parks that preserved habitat for Australia’s unique wildlife. We saw plenty of kangaroos—and one roadside echidna! I was so excited to see the cute little echidna, (aka spiny anteater, left). Unfortunately, I didn’t take this photo; Australia’s roads seem narrower than is typical in the U.S. and frequently there were no shoulders. Still, every chance we got, we pulled over so I could look for birds.

Our first birding destination was along a side road called Chiltern Trail, in Ku-Ring-Gail Chase National Park. That stop yielded Little Wattlebirds, and both New Holland and White-cheeked Honeyeaters, easily distinguished by the former’s white eye, prominent in a black face. 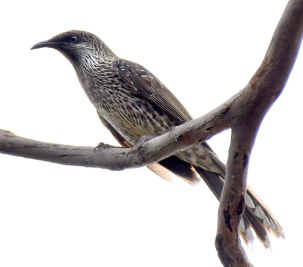 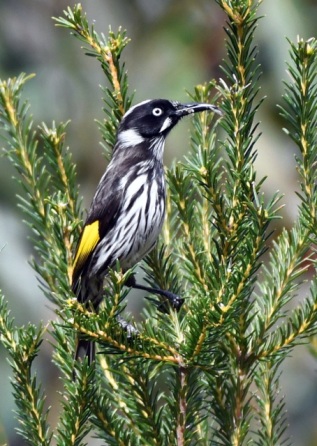 I still wanted to see the beach, so we randomly stopped in Tea Gardens, a cute but busy seaside village, and did some exploring. Surprisingly, the beach was mostly deserted—by both people and birds, but a pair of amorous Crested Pigeons on an overhead wire made up for the lack of shorebirds.

Back in the car, I was consulting the map when I noticed a small notation next to a place called The Entrance. What in the world was Pelican Feeding? Of course we had to find out.

My only complaint is that I didn’t know about Pelican Feeding ahead of time, so I could have enjoyed the anticipation. The Entrance turned out to be a small village at the end of a spit of land. A bridge connected it to a similar spit coming from the north. Together, they enclosed Tuggerah Lake, just north of Central Coast. 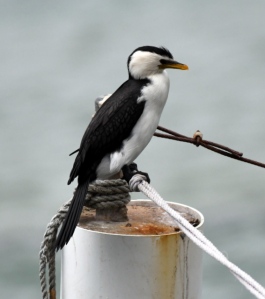 I was first attracted to a the Silver Gulls and cormorants roosting on a sand bar in the middle of the water. Then I noticed the pelicans. They were everywhere! We learned that every afternoon at 3:30, a group of locals feeds dozens of these huge birds. It’s an opportunity to both entertain and educate the public, as well as monitor the health of the colony. There’s no charge to watch although donations help pay for all the fish. The Pelican Feed is one of the area’s top tourist attractions—and we found it by accident!

As the sun sank over the land (a reminder that we were on an east coast), we stopped for the night in Tahlee, in just north of Newcastle and adjacent to some promising mud flats. I couldn’t wait for morning!
___
Photos, from top: Silver Gull, Short-snouted Echidna (credit Andrea Arbogast), Little Wattlebird, New Holland Honeyeater, White-cheeked Honeyeater, Crested Pigeons, Little Pied Cormorant, Australian White Pelicans.

2 thoughts on “Birding Down Under: North from Sydney”