It was our final day on the coast of New South Wales, and I wanted to see shorebirds.  We had stayed in Yamba, so after breakfast we headed for the beach. It  was empty. No people. No birds. Just wind, and plenty of that.

Discouraged, I started to head back to the car when a large, blunt-headed black bird flew overhead, then landed in a near-by tree. I rushed over, camera in one hand and binoculars in the other. Yes, there it was—a  Yellow-tailed Black-Cockatoo! It gave me an indifferent look, then went back to munching on the flowers while I clicked away. 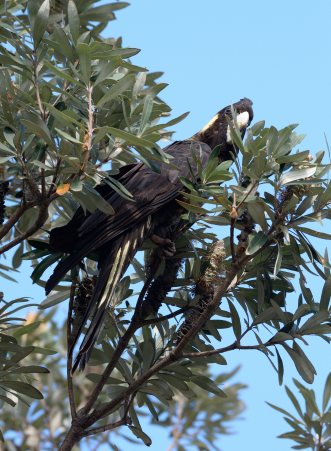 Turning to head back to the car, I noticed something moving in the next tree. Aha! But what was it? Honeyeater? Wattlebird? Something completely different?

Next, a Pied Currawong landed on the overhead wires. He was a bit of a clown: 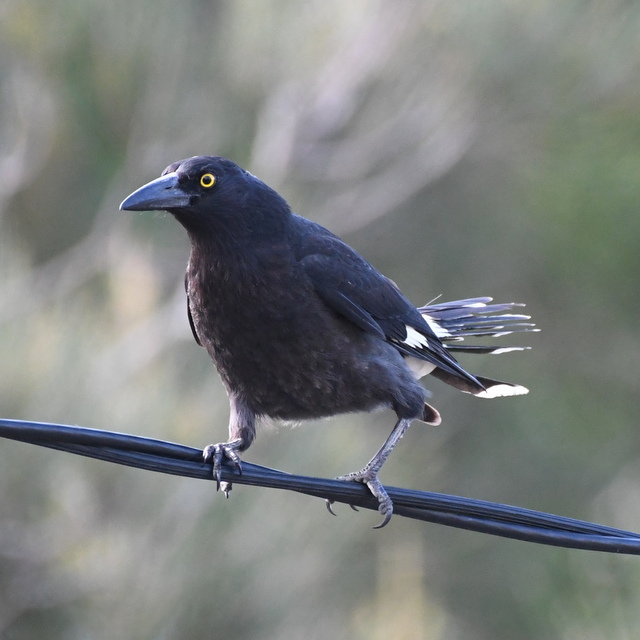 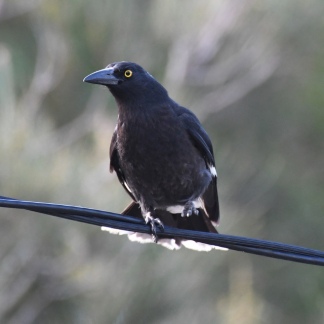 Finally, I looked up to spot a Brahminy Kite, wings spread to catch the rising thermals (photo at top)

Well, that was a terrific start to the day, but I still wanted to see shorebirds. More specifically, I wanted to see the birds that lived on a rocky coast. We’d been to wharves and harbors, back bays and briny freshwater lakes. I’d mucked through mudflats and threaded my way through mangroves. And we’d enjoyed the and pounding surf of deserted sandy beaches. The best way to add more species to a trip list is to vary the habitats you visit, so it was time for rocks!

We hopped back into the car and drive north to Woody Head. This place was far from deserted, though still not overly crowded. I left Pete under a tree with a good book and went to join the beach combers next to the water. I was concerned that so much activity would scare away any birds, but I needn’t have worried.

The beach was about half rocks, which were eroded until they were flat enough to walk on, but they were covered with periwinkles and barnacles. I didn’t want to squash anybody, so as I ventured out into the intertidal zone I threaded my way between them.

The tide was out, and some sandpipers were busy probing the clumps of washed up seaweed, hoping for tasty snacks. I immediately identified a Ruddy Turnstone, a very successful species with a worldwide distribution. A small peep hurried past; I would have to consult my field guide for that one, so I took a series of photos for later reference. 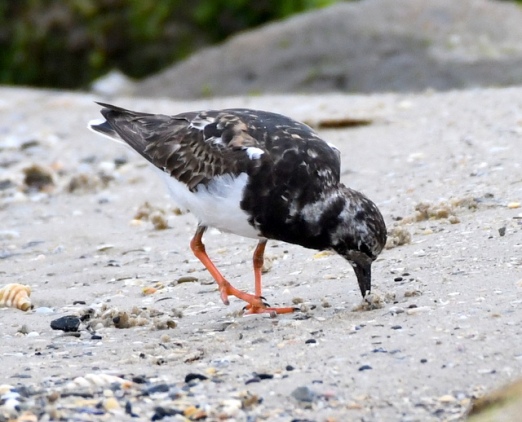 The next bird I saw was significantly larger, with a distinctive down-curved bill. I recognized it as another familiar bird—a Whimbrel. Turnstones and Whimbrels are nice, but I wanted to see something new!

One of my favorite birds is the Black Oystercatcher. They’re found off the Pacific coast from Mexico to Alaska. The birds in front of me looked exactly the same, as far as I could tell, but the book says they’re a  different species—Sooty Oystercatchers. Captivated by their black bodies and bright orange feet, beak, and eyes, I couldn’t resist taking lots of pictures!

Venturing further out onto the rocks, I carefully approached a flock of terns. I didn’t want to flush them, I just wanted to be close enough to grab some shots and make an ID. Perhaps it was the frequent presence of people on the beach, but they let me get quite near before a few of the birds started to look agitated. I quickly retreated and watched from a comfortable distance. 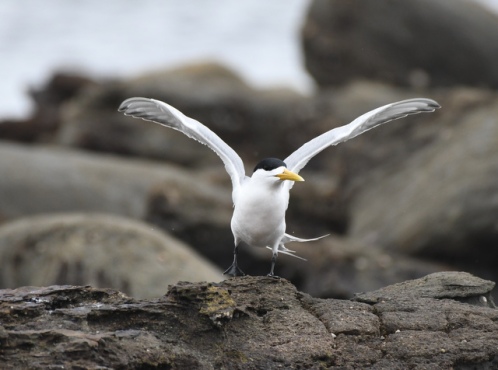 Most of the terns were sunning on a large rock at the water’s edge, but some were busy fishing—successfully, as you can see. With their yellow beaks and black fringe, I identified them as Crested Terns, a common species.

Some black and white cormorants flapped past. Were they Pied Cormorants? Or Little Pied Cormorants? Studying the field guide was no help at all—the primary difference is size. I needed a cooperative bird and a measuring tape!

(I’m guessing these are Pied Cormorants, based on the yellow over their beaks. Correct me if I’m wrong.)

The tide turned, and it was getting late. It was time to go. We still had several hours of driving that afternoon. Our itinerary called for us to spend the next day in Brisbane—there was a special zoo we wanted to visit before heading to the airport for an evening flight to Cairns.

One thought on “Birding Down Under: Yamba to Brisbane”