The neighborhood seemed quiet this morning. Was it the overcast skies and drizzle muting all sound? Was it that the kids are back in school instead of riding bikes around our cul-de-sac? It took me a bit of thinking before I realized what was missing.

Grackles. The Common Grackles have all left town for the winter. I hadn’t realized how pervasive their squeaking and scolding was until it stopped. I have to admit, it isn’t the prettiest sound—just one reason these are not the most popular birds. In addition to the noise they make, they’re big, and they seem to have a very active digestive system, depositing prodigious quantities of droppings on nearby cars—or pedestrians. 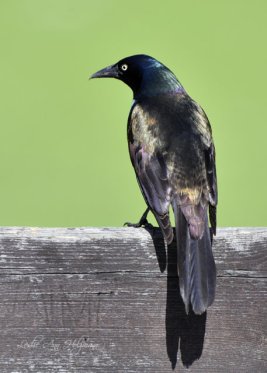 The birds that summer here in Colorado, near the western edge of their range, won’t have far to go this fall. They simply shrink their range to the eastern part of the country, from southern Minnesota southward, where grackles are found year round.

Common Grackles weren’t always this widespread, but the conversion of the eastern forests into farms and pastures has benefitted the birds to the point where they are now one of our most abundant species. This isn’t necessarily a good thing. Their overabundance means that they’re a significant agricultural pest, with a particular fondness for corn seedlings. And since they sometimes eat eggs and nestlings of other species—and even sometimes adult birds—they contribute to the decline of many eastern songbirds. 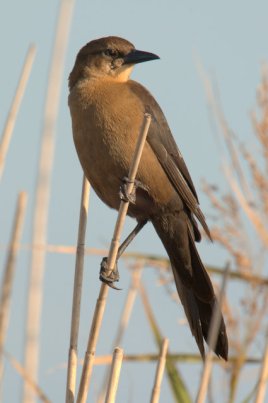 Common Grackles aren’t the only kind of grackle. Two other, larger species make their home in the United States. Boat-tailed Grackles (a female is shown here at left) live along the coast from Texas to Cape Cod.

Great-tailed Grackles are a southwestern species, found from Louisiana to California, and venturing as far north in summer as Nebraska. They’re not common in Colorado, perhaps because of our higher altitude, although I’ve seen them occasionally around ponds and lakes east of the mountains.

Great-tailed Grackles weren’t always found this far north. According to Wikipedia, they are originally from Central and South America, but have expanded their range over 5,500% between 1880 and 2000, following urban and agricultural corridors.”

If you think our little Common Grackles are annoying, wait until you meet their longer-tailed cousins. You can hear Great-tailed Grackles from blocks away. Huge flocks congregate in street trees, threatening the paint job of any vehicle parked in the shade below. If they’re nesting, they can be aggressive, flying right at unwary intruders, and don’t even think of munching your fast food at an outside table, unless you want to eat hunched over, guarding every French fry.

An additional eight are found farther south. I encountered this Greater Antillean Grackles in Puerto Rico, where it was one of many crowded into a palm tree outside our bedroom window:

Grackles are easy to ID. As I mentioned above, males appear black and have yellow eyes. Females and immature birds are dark brown, with either yellow or brown eyes depending on the species. They all share a unique, keel-like tail that twists into a vertical position during flight, much like the tail of a fish.

With their noisy, messy habits, there are plenty of reasons to dislike grackles. On the other hand, they’re not all bad. After all, they are a native species, in the same family as Red-winged Blackbirds, cowbirds, and orioles. They have their place in nature. And while grackles may look black most of the time, a closer inspection of the Common Grackle reveals a rainbow of colors in the dark feathers. Admit it—they’re pretty! 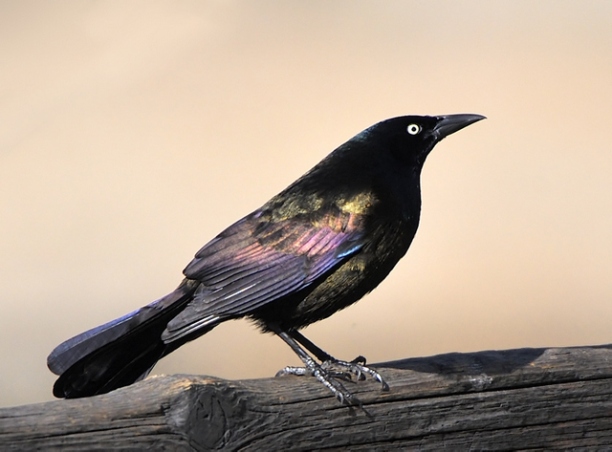