The neighborhood seemed quiet this morning. Was it the overcast skies and drizzle muting all sound? Was it that the kids are back in school instead of riding bikes around our cul-de-sac? It took me a bit of thinking before I realized what was missing.

END_OF_DOCUMENT_TOKEN_TO_BE_REPLACED 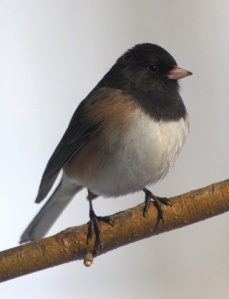 I just added bird #19 to my yard list. That may not sound like very many, but we only moved into our new house in May, and we had no landscaping until August. Birds are rarely attracted to bare dirt!

Not surprisingly, #19 was a Dark-eyed Junco. Vertical migrants, Juncos spend the summer up in the mountains, nesting in the conifers, and descend to lower elevations for the winter. At 7,100 feet , our house barely qualifies as a lower elevation; the park up the road, a mere 200 feet higher, hosts juncos all year.

END_OF_DOCUMENT_TOKEN_TO_BE_REPLACED

There are a lot of birds with “Common” in their names: Common Goldeneye (right), Common Loon, Common Raven, Common Murre, Common Tern, Common Yellowthroat, and so on. Some truly are common— the Common Gallinule is one of the most widespread birds in the world. Others, such as the Common Eider, are only found in remote areas. Perhaps they’re common in their range (the Common Eider is considered a species of least concern), but they’re certainly rare or nonexistant where I live.

END_OF_DOCUMENT_TOKEN_TO_BE_REPLACED

Birders in the U.S. are supposed to hate European Starlings (Sturnus vulgaris), and there are plenty of reasons to do so.

The species originated in Europe, North Africa, and western-to-central Asia. While mostly abundant there as well, the species has been red-listed in England after populations plummeted by more than 80% over the last 40 years [1]. Other northern European countries have witnessed a similar decline [2]. We can only wish that would happen here.

North American populations have exploded since their introduction in the early 1890s. According to the USDA, starlings cost our country $1.5 million in damage to agricultural crops, the consumption of feed intended for livestock, and in property damage. In one winter, a million starlings can down 27,500 tons of livestock feed, not to mention what is ruined by their accumulated droppings—and latest estimates put the US population at over 200 million birds.

END_OF_DOCUMENT_TOKEN_TO_BE_REPLACED 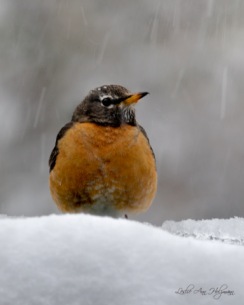 Robins are often considered harbingers of spring, and in some places they are, but here in Colorado they hang out year round. In fact, on the 2006 Christmas Bird Count, in the middle of a blizzard—with the thermometer registering a whopping 6 degrees—we tallied over 200 American Robins in our sector alone… and those were just the ones we could see in white-out conditions.

What spring actually brings is singing robins. For some reason, they have no sense of  decent timing, and will start in at 4 am with their cheerful cheery-o, cheery-o. The last thing I feel at that hour is cheery.