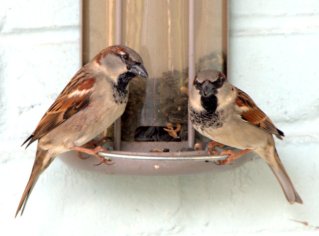 House Sparrows are frequently despised by North American birders. An invasive species, they commandeer nest cavities needed by native birds, hog feeders, and generally make a nuisance of themselves. Agricultural pests, they’re the target of various, and usually unsuccessful, “control” strategies, yet I have to admire this species. In spite of all our attempts at thwarting them, House Sparrows continue to thrive.

Introduced from England during the second half of the nineteenth century, they’ve been incredibly successful at colonizing the western hemisphere, and are now found from Canada to Patagonia, with only a gap for the Amazon rainforest.  Whether you’re visiting an urban neighborhood or the southwest desert, House Sparrows are there, singing their little hearts out.

They’ve also been introduced to other parts of the world. This species was the first I saw upon emerging for the airport terminal in Johannesburg, South Africa (a bit of a letdown!), and was among the first I noted during my visit to Sydney, Australia. In fact, the House Sparrow is now the most widely distributed wild bird on Earth!

While they’re certainly in no current danger of going extinct, I was shocked to discover that House Sparrows are declining throughout their native range, which includes Europe, Asia, and north Africa. My first clue was this sign I spied while birding in New Delhi, India: 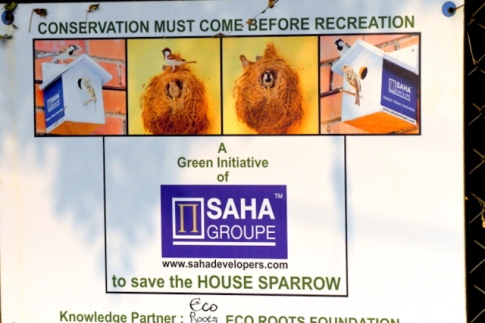 How could such an incredibly successful species be at any risk?

While we often think of House Sparrows as urban birds, they actually prefer farms, which provide the perfect combination of food and nest sites. Originally arising in the Middle East, their range slowly extended outward along with the development of agriculture. Now, as modern agricultural practices consolidate family farms into huge enterprises, populations have declined.

The same factors influence populations in those areas where the species has been introduced. According to the Cornell Lab of Ornithology,

House Sparrow populations declined by over 3.5% between 1966 and 2015, resulting in a cumulative decline of 84%, according to the North American Breeding Bird Survey. Partners in Flight estimates a global breeding population of 540 million with 13% in the U.S., 2% in Canada and 2% in Mexico. The species rates an 8 out of 20 on the Continental Concern Scale.

The switch to less desirable habitat is only one factor affecting the birds. A new study just published in  Frontiers in Ecology and Evolution measured levels of free radicals, a sign of oxidative stress, in the sparrows’ blood. Under stressful conditions, the levels of these free radicals overwhelm the body’s ability to neutralize them, so measuring them is a way to measure overall stress on an animal.

The researchers found that urban sparrows suffered higher levels of free-radical damage in comparison to rural birds. In addition, the blood samples revealed that city-dwelling sparrows were trying to fight off these damaging molecules but, in comparison to their rural counterparts, their natural defenses had a lower capacity to do so.* 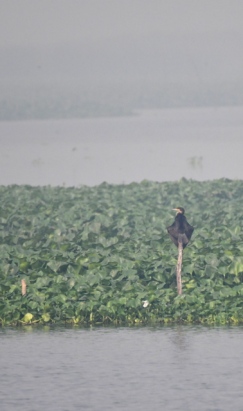 The study concluded that the stress was primarily due to high levels of air pollution and poor nutrition. I can personally attest to the smothering layer of smog I encountered in New Delhi last year (right). It was unbreathable. If we were suffering, surely the resident birds were too.

It seems that even the most successful species are at some degree of risk when confronted with hunting, pollution, and habitat destruction. Just ask the Passenger Pigeon.
­­­_____
* Amparo Herrera-Dueñas, Javier Pineda-Pampliega, María T. Antonio-García, José I. Aguirre. The Influence of Urban Environments on Oxidative Stress Balance: A Case Study on the House Sparrow in the Iberian Peninsula., 2017; 5 DOI: 10.3389/fevo.2017.00106

The answer to last week’s bird quiz is Barn Owl.