All summer, the shrub sat in the back corner of our yard, quietly filling the space between the fence and a dry creek bed. The olive-green leaves were a bit drab, but provided a nice, neutral backdrop for an adjacent Blue Mist Spirea (Caryopteris). The shrub had been a bit late to leaf out, and I was contemplating replacing it with something more interesting. I’m glad I waited. In the last few weeks, that inconspicuous shrub has suddenly become the star of the garden.

Three-leaf Sumac (my preferred moniker) is native to the western U.S. and Canada, where it is hardy from 3000 to 9500 feet (USDA zones 4 through 8). It’s common along the Front Range; this photo was taken in Colorado Springs at the Garden of the Gods. No wonder it’s doing so well in my garden. 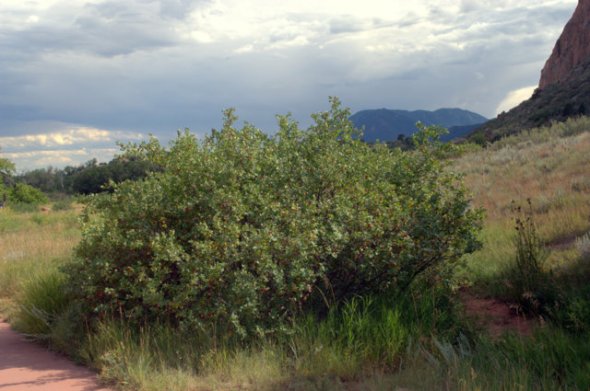 Needing only 10 to 20 inches of rainfall a year once established, this sumac does just fine without supplemental irrigation, and handles any soil type from nearly bare rock to sand or heavy clay. Just make sure the roots are well-drained—shrubs are intolerant of saturated soil. Plants thrive in half shade to full sun.

These are fast-growing shrubs; mine have doubled in the two years I’ve had them and should eventually reach six feet tall and wide. If they get too big, I can always prune off the longer stems and use them to make baskets, as do the Ute Indians. (Native Americans also used the fruits as food, to flavor beverages, and as medicines.) 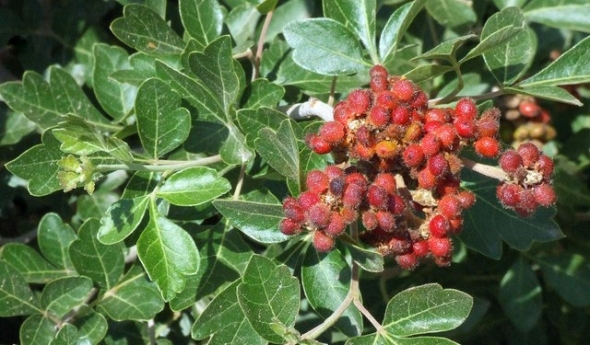 While grown primarily for its gorgeous flaming fall color, sumac also offers greenish-yellow spring flowers and bright red summer berries. While the flowers are hard to see, being approximately the same color as the emerging leaves, the berries are quite showy. I blame a late spring freeze for their absence this year, but have high expectations for next summer—they should provide a stunning contrast to the brilliant periwinkle flowers blooming next to them!

Other good companions might include other natives with similar needs—ornamental grasses such as Little Bluestem; xeric shrubs such as golden currant, chokecherry, or rabbitbrush; or larger plants like mountain mahogany, and Gambel (scrub) oak.

As you might gather from some of the common names, the plants have a distinctive acidic aroma. Whether you compare it to lemonade or a skunk is a matter of personal preference. Since ours are sequestered against our back fence, we aren’t bothered by any smells, good or bad.

Bees and other pollinators are attracted to the flowers, but apparently, sumac doesn’t taste very good. While the thick shrubbery provides good cover for small animals and birds, they only eat the fruit if more palatable options aren’t available. Likewise, deer and elk are reluctant to browse the leaves, although they will if hungry enough. I’m pleased to report that the army of rabbits in our backyard have completely ignored these shrubs.

Sumac is frequently planted in public areas—at rest stops and recreation sites, along roadsides, and as windbreaks. It’s useful for erosion control, and will even grow on mine tailings. I’m surprised I don’t see it in home landscapes as often. It’s a plant worthy of wider use.