On a recent trip to the botanic gardens, I was captivated by a constellation of tiny blue flowers, stars spread on tender green leaves in the shade of some mature pines. Five azure petals surrounded a hollow white center on blossoms under a quarter inch in diameter. They bloomed in profusion, an inverted sky beneath my feet. 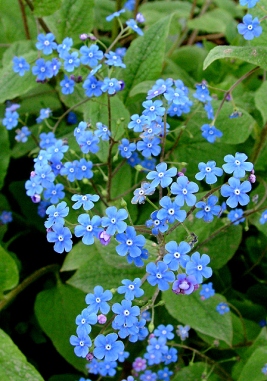 I immediately assumed I was enjoying a planting of Myosotis sylvatica, the familiar Forget-me-not. However,  I discovered I was wrong when I leaned over and read the sign saying “Siberian Bugloss (Brunnera macrophylla).”*  Huh? I wanted to learn more about this forget-me-not impersonator.

I later learned that Italian Bugloss is also called False Forget-me-not, which makes perfect sense when you consider that, to the casual observer, its flowers are identical to those of Myosotis. Similar in size, both are sky blue. Both grow on the branched stems of small, sprawling herbaceous plants with the tender, green leaves that  you would expect to find in damp shade.

The leaves are shaped a bit differently, though. Myosotis leaves are like narrow, blunted arrowheads. Brunnera has more circular, heart-shaped leaves. Some cultivars, such as Jack Frost and Silver Heart, have an attractive silvery surface to their leaves, or are variegated, and are treasured for their foliage as well as their flowers.

In spite of its name, Siberian Bugloss comes from Turkey. It forms clumps that slowly spread via creeping rhizomes. Under ideal conditions, the plants eventually fill in to form a thick ground cover. 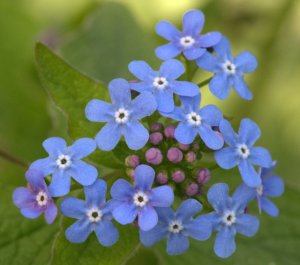 Both forget-me-not and bugloss are in the Borage family, so it’s not surprising they have a lot in common. Like forget-me-nots, bugloss is a perennial hardy in zones 3 through 8. Both bloom at the same time in early to mid-spring. They both prefer soils with an abundance of organic matter. Water needs are “medium” and both do best in part shade, with Myosotis able to handle a bit more sun and wetter soil.

Both are considered “low maintenance” plants, and both tolerate nibbling rabbits. (The rabbits in my yard don’t nibble, they chomp!) Both self-seed, but Myosotis does so with a vengance. In fact, it can be invasive in some parts of the country, particularly the wetter northern states (hence its common name). Bugloss is much better behaved.

Either of these species would look at home in a woodland setting, brightening the light shade under those trees with more-open crowns. I’m considering adding Siberian Bugloss to my “mountain” themed garden on the exposed north side of our house, where winter’s wind and snow make conditions challenging.
_____

*To further complicate matters, there is also an Italian Bugloss,  Anchusa azurea: 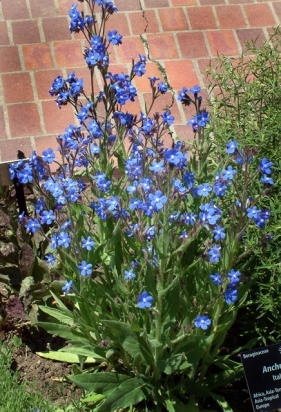 One thought on “A Better-Mannered Forget-me-Not”