Birders spend a lot of time looking in trees. Of course, we’re hoping to see birds, and often we do. But birds aren’t the only animals that live in trees. And, while I get a thrill spotting a less-than-common bird among the branches, I also get rather excited when it’s a less-than-common mammal—or other creature. 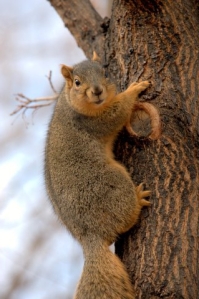 Besides the birds, what do I see in trees? Squirrels! It’s a rare birding trip when we don’t spot at least a couple of squirrels, and typically there are plenty more. Here in the Colorado Springs area, by far the most common species is the Eastern fox squirrel, which some idiot nostalgic person from the East introduced to Colorado during the 1940s. Fox squirrels spend their time sneaking around urban yards, emptying bird feeders and chewing up grill covers and the fabric cushions of our patio furniture.

Colorado also has two native species of tree squirrel. Pine Squirrels (below, left) live in mature coniferous or mixed forests, where they happily spend their days munching pinecones, avoiding predators (of which they have many), and enthusiastically making baby pine squirrels. You can easily recognize them by their prominent white eye-ring. 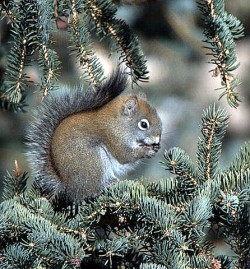 Abert’s squirrels are also easy to recognize—they have cute tufts on the tips of their ears. Typically black, they also come in red and gray. Like pine squirrels, Abert’s squirrels also depend on pine trees for both food and housing. They eat the sap, needles, buds, and all parts of the cones (along with mushrooms and other fungi, mistletoe, insects, and dead animals). Abert’s squirrels are the only squirrel that doesn’t save up food for the winter, so you can find them busily scavenging year round.

Another animal that is often found in trees is the porcupine. There are two families of porcupines. Those in the eastern hemisphere (family Hystricidae) are ground-dwellers, but our western hemisphere animals (family Erethizontidae) are good climbers and prefer to hang out in trees. Porcupines are fairly common, but you may have to look carefully to see them. Yes, it’s that dark, fuzzy ball up near the top of that big tree. (And note that they often sleep with their tongues hanging out!)

Porcupines may look soft and fuzzy, but those quills (and there can be over 30,000 of them!) can end up in a sensitive nose or paw, making a predator (or curious dog) pretty miserable. And while the quills fall out easily, the porcupine easily grows replacements.

Homeowners in forested areas may consider porcupines to be pests—as they dine on the bark of a tree, they may inadvertently gird a branch, killing it. These gnawing rodents don’t stop at bark, however. They’ve been known to eat fruit, leaves, springtime buds, and even canoe paddles.

If you hike in the mountains much, sooner or later you’ll likely come across a bear in a tree. Often it’s the cubs, stowed for safety while momma forages for food. Bears are good climbers, so if you feel threatened by an encounter with one, scurrying up a tree isn’t going to save you.

Trees are home to more than mammals. Lizards live in trees, or at least some species do. For example, anoles (left) come in green and brown, and both blend nicely with the bark. Tree-dwelling lizards are more coming In more tropical locales. 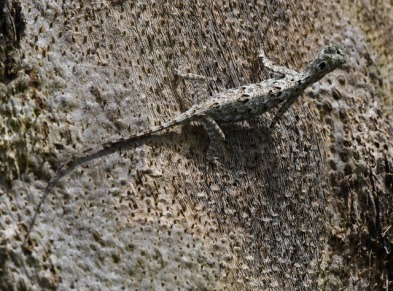 Snakes also hang around in trees. Amethystine pythons are Australia’s largest snake; they can grow as long as 24 feet! During our 2016 visit to the northeastern part of the country, we got to see one that was pointed out by our river boat guide. It was woven around the branches of a large mangrove,  enough so that we had no idea how long it was. That tree also provided a nighttime roost for a flock of Cattle Egrets, and if there happened to be one missing in the morning, well, egrets can’t count.

As if that wasn’t enough, the next tree was home to a Green Tree Snake. These “only” grow from three to six feet in length, and they prefer dining on small aquatic creatures, not birds. Thankfully, neither species is considered particularly dangerous to humans. 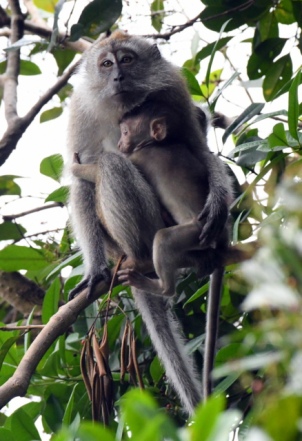 I discovered my favorite tree-dwellers during a short visit to Singapore. I was hiking a nature trail around a popular reservoir, scanning the trees for birds. Instead, I was surprised by a troop of monkeys! I later learned that they were Long-tailed Macaques, well-known for mooching food off visitors.

As much as I enjoy looking for birds wherever they may be, I am just as delighted to discover other wildlife. Maybe instead of “birding,” we should call it “wildlife-ing”!