What grows one to three feet high, has small blue-green leaves, clusters of pretty yellow flowers, and is a stubborn, nasty, and aggressive noxious weed that is supported by an extensive system of underground stems? Probably the only good news is that it isn’t typically a weed in most landscapes, but if you’ve been out hiking much lately, you’ve likely encountered Leafy Spurge.

The plant is fairly easy to identify. Its scientific name should provide a clue: Euphorbia esula. Euphorbias may be tiny annual plants or huge trees. Some look like succulents or cactus, while others are leafy perennials. All in all, there are over 2,000 species in the genus, one of the largest among the flowering plants. Other Euphorbias include some familiar ornamentals, such as crown-of-thorns, cushion spurge, and poinsettias, plus another Colorado noxious weed, donkey-tail (aka myrtle) spurge. Spotted spurge, E. maculata, is a common lawn and garden weed. 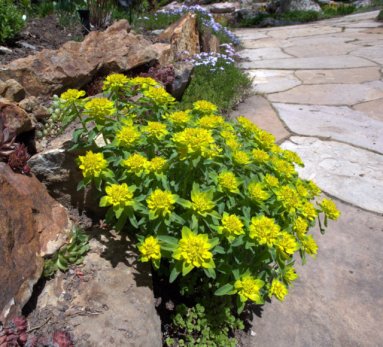 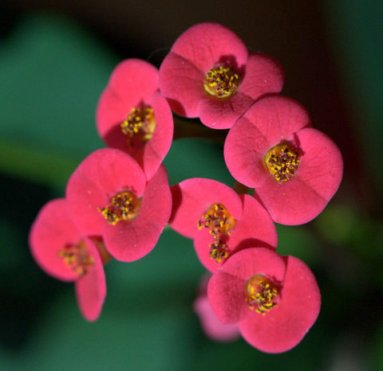 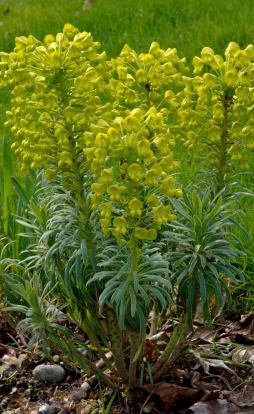 Like all Euphorbias, leafy spurge has milky white, sticky latex sap and diminutive flowers set off by showy bracts. In this case, those not-really-petals are bright yellow, and you have to look closely to see the actual flower in their midst.

In order to be listed as a noxious weed, a plant must be 1) invasive, 2) difficult to eradicate, and 3) have a negative economic impact on rangeland or pastures used for grazing. Leafy spurge qualifies on all three accounts.

Noxious weeds are also immigrants; no matter how annoying a native plant may be, it will not be designated as “noxious.” Leafy spurge originated in central and southern Europe through most of Asia, and likely immigrated to the New World along with bedding and fodder for cows and horses. It’s now found across most of the American west, as well as the central eastern states—and it’s spreading. According to a Colorado State University fact sheet, “A 1990 survey found 44,000 acres in Colorado infested with leafy spurge. In 2002, the Colorado Department of Agriculture conducted a follow-up survey and found more than 73,800 infested acres of leafy spurge.” Lucky us.

Acreage filled with spurge poses a serious problem, as cattle won’t eat it. (Euphorbia sap is typically poisonous.) As the clumps spread they displace desirable grasses, which reduces the number of cattle the rangeland can support by 50% to 75%.

Leafy spurge is one of the first plants to emerge in the spring, and typically blooms in April and May, although higher elevations bloom later, and this year’s cold spring has delayed the bloom even further, until June.

The plants have a vigorous and extensive root system. While most of those roots are in the top 12 inches of soil, some may extend as far as 15 feet deep. They’re packed full of stored food, so no matter how often you whack off the top growth, the plants resprout. The roots have buds all along them that can grow into new shoots.

As if this vegetative reproduction isn’t enough, the plants also reproduce by seed. Each shoot produces an average of 140 seeds, which the drying seed pods eject as projectiles, shooting them as far as 15 feet. This is one species determined to reproduce!

Once leafy spurge is established, getting rid of it can require constant, persistent effort for five years or more, and often herbicides are called for. It’s far better to recognize it early and annihilate the suckers! The fact sheet mentioned above has excellent photos of leafy spurge at all stages of growth. Please check it out.

One thought on “Leafy Spurge? Noooo!!!”