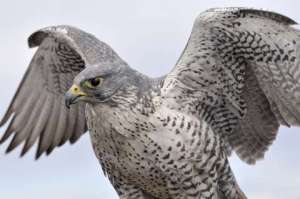 I’ve learned the lesson once again. If you stay home, you won’t get any photos. If you go out, you may still come up empty handed—or you just might be surprised.

The forecast was for snow and cold, but Lake Pueblo State Park was celebrating their 15th Annual Eagle Days. We couldn’t miss that! So I layered a jacket over a sweatshirt over a thin turtle-necked top over long underwear, piled about 30 pounds of camera gear into my pick-up, threw in a ham sandwich, hat, gloves, binos, field guide, and notepad, and headed south.

As I drove through the quiet early morning streets, I eyed the clouds boiling over the mountains to the west. I figured that the odds for getting photos worth keeping were pretty low but at least I’d enjoy the day with some birding friends. 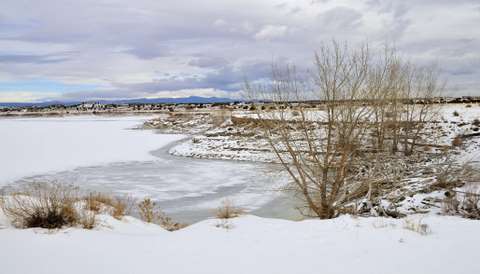 We arrived at the state park mid-morning, headed for our usual lookout point at the state wildlife area, and set up scopes and telephoto lenses. Where were the eagles? In fifteen years, Eagle Days had always produced at least one Bald Eagle. We didn’t see any. Of course, the reservoir at this spot was frozen pretty solidly. Any eagles should be near open water, where they could get a meal.

We did pick up a few other raptors—the ubiquitous Red-tailed Hawk and a low-flying Northern Harrier. A distant shrike—was it a Loggerhead or a Northern?—surveyed the rabbitbrush from the top of a juniper. 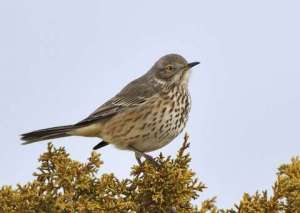 We headed toward the dam, where the deeper water was partly ice-free. What were all those birds in the roadside trees? After several wild stabs (thrush? Pipet?) we finally realized they were Sage Thrashers. That was special! 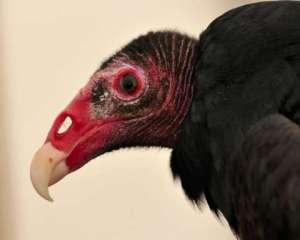 Joining the crowd at the visitor center, we checked out the displays provided by a variety of nature-related organizations and agencies. The Pueblo Raptor rehab folks were there with an assortment of “education birds”—those now healthy but deemed too disabled to be returned to the wild. I was able to snap some close-ups of a regal Swainson’s Hawk and a personable Turkey Vulture named “Lurch.” 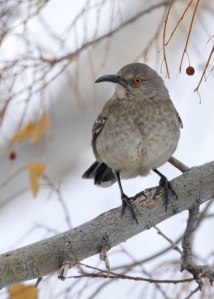 As we ventured back outside, my friend spotted a Curve-billed Thrasher sitting in a tree right in the middle of the crowded parking lot. It turned from side to side as I snapped pictures, just like a fashion model in a photo shoot, its yellow eyes glaring at me the whole time. That’s another bird we don’t see very often.

The Air Force Academy cadets were there with their hunting falcons, the academy mascots. Two were pure-bred Gyrfalcons and one was a hybrid. Now how often do you get a chance to see a Gyrfalcon—much less pet its tummy? When the cadets flew one of the birds, its speed and agility were breathtaking—and impossible to focus on. No photos of that event! 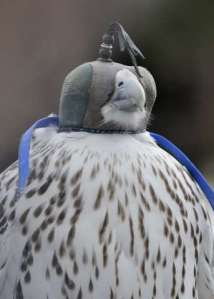 A rehabilitated hawk was scheduled to be released that afternoon, but with the storm coming, it was decided to wait for better weather. I was disappointed, but glad the bird would have a better chance at readapting to life in the wild.

As the clouds thickened, the air grew colder and the wind picked up. We made one more stop along the Arkansas River below the dam and picked up a few more species, including a male Belted Kingfisher, three Buffleheads, and an American Pipit hanging out with some Killdeer. Then, just as we were leaving, some sharp eyes spotted a bird sallying out from a perch to nab some hapless insect, just like a flycatcher! In winter? Sure enough—a Black Phoebe was hunting insects over the river bank. Black Phoebes are common in places like California, but not in Colorado, and certainly not in February!

As we headed back north on the interstate, the snow began to fall in earnest, and it’s still coming down as I sit at my computer, sipping tea and writing this. I’m sure glad I didn’t stay home today!