Are you staring out the window, watching the snowflakes, and desperately wanting to plant something? Guess what—you can! It may be too early to start tomatoes and broccoli, but lettuce seedlings can handle the cold with a little protection. So pull out the recycled six-packs and potting soil, soak your peat pots, and clear some space on the counter. It’s planting time!

I’ve written several posts about starting seeds (see April 2009 for the basics, or choose “Gardening: Starting Seeds” under Categories, in the upper left of the screen), so I won’t go over all that again. Rather, I’d like to encourage you to push the limits and experiment a bit. Most seed packets contain far more seeds than a home gardener is likely to use, so you can afford to take a few chances.

Lettuce is a cool weather crop, doing best in spring and fall. Some varieties, especially those labeled “slow to bolt” can produce a crop during the heat of the summer. But what about winter? Well, with a bit of trial and error, I discovered that many leaf and romaine lettuces are hardy to about 10° F. I never would have guessed!

I have a small (10 x 11 feet) unheated greenhouse where I grow lettuce in the late winter and tomatoes, basil, and cucumbers in the summer. (At our altitude of 7,060 ft. that is the only way I’m more or less guaranteed a crop of these heat lovers.)

Starting my lettuce seeds indoors under lights in early-too-mid-January, I usually have robust seedlings hardened off and ready to set out around the end of February. One year I got carried away and ended up with many more transplants than could fit in the space I had for them. The practical thing would have been to add them to the compost pile, but I’d grown these plants from seed-hood. They trusted me. I had to give them a chance.

I was sure the garden was still frozen solid, but I went outside to check anyway. Yes, eleven out of twelve beds were dirt-cicles. However… I have a pile of corrugated plastic panels that I use to turn my boxed beds into coldframes in the spring. Lacking storage in the garage, I’d left them piled on the twelfth bed. The soil underneath was cold but workable. Eureka! 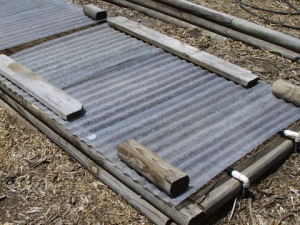 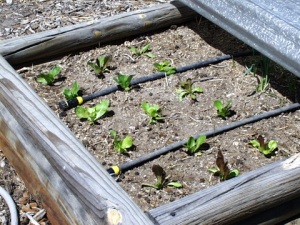 I set two dozen brave lettuce plants into that chilly soil, watered them in with very cold water, and covered the bed again with a layer of plastic panels held down with bricks. There was no extra insulation. No blankets. No straw. Just the plastic. The bumps in the ends of the panels provided a minimal amount of venting for sunny days.

My expectations were pretty low, but I’d at least given my babies a shot at life. Remember, it was still mid-winter. Nights dropped into the teens. March snows blanketed the garden. Every week or two, when I remembered, I went out to check the plants and give them more water. Each time I was shocked to find green leaves.

Then temperatures began to warm. The seedlings, which hadn’t really changed for four weeks, put on a growth spurt. Each time I carried water to them (the hoses were still disconnected to avoid freeze damage), they were noticeably bigger.

I harvested the first outside leaves in early April. By the end of the month, we were eating fresh salads every night. Yes, the plants in the greenhouse were about two weeks ahead of the ones growing outdoors—but not all gardeners have greenhouses.

Perhaps due to the frigid temperatures they were exposed to, the outdoor lettuce plants bolted in early May. I really didn’t care. I had planted successive batches of seedlings, so we had plenty of lettuce for the months ahead.

In thinking over this experience, I realized that I had several points in my favor. Our coldest temperatures come in January, reaching -18 this year. I didn’t plant until mid-February (and I probably could have waited another month). Also, Colorado’s Front Range has a lot of sunshine to warm my improvised cold frames. It would be interesting to try this in an area where the weather is often cloudy. Still, given how short our growing season is, I was very excited to discover that lettuce could be grown during a Colorado winter.

One thought on “Planting Lettuce in Winter”